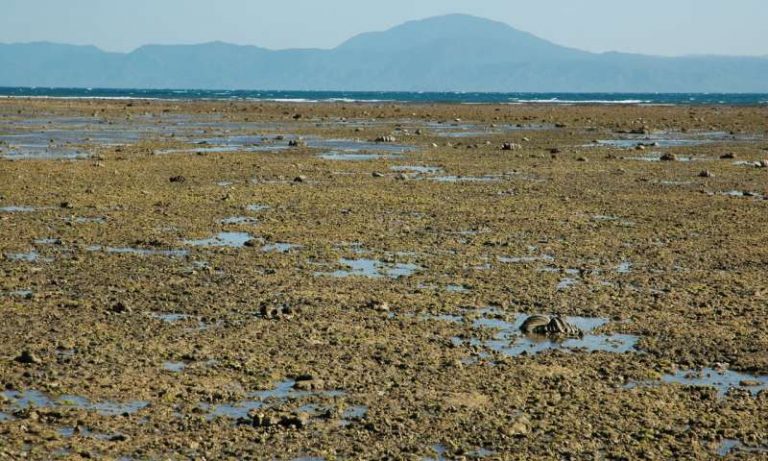 The reef-flat at the Low Isles, which was covered with living branching Acropora corals in 1928, is now mostly dead. (Image: Professor Maoz Fine, Bar-Ilan University)

Coral reefs around the world, such as Australia’s Great Barrier Reef, are under increasing stress due to a combination of local and global factors. As such, long-term investigations are becoming increasingly important to understanding ecosystem responses.

A new study — the longest coral reef survey to date — provides an in-depth look at Australia’s Great Barrier Reef over the past 91 years. The survey was published in the journal Nature Communications by researchers at Bar-Ilan University, Inter-university Institute for Marine Sciences in Israel, and the University of Queensland in Australia.

The study concludes that since 1928, inter-tidal communities have experienced major phase-shifts as a result of local and global environmental change, leaving few signs that reefs will return to their initial state in the near future.

During this time, they documented environmental conditions surrounding the coral reefs of the Low Isles, as well as the community structure of tidal and sub-tidal communities, using, for the first time, a diving helmet.

Members of the expedition produced aerial photography-based mapping of the island.  This highly-accurate mapping enabled researchers in the current study to follow in their footsteps and revisit and sample the exact inter-tidal and sub-tidal locations previously explored 76, 87, and 91 years later, thereby forming the longest ecological survey to date.

In the latest investigation, carried out in three phases in 2004, 2015, and 2019, researchers discovered that inter-tidal communities have experienced major phase-shifts over nearly a century. The number of different species of corals and invertebrates declined over time.

Specifically, branching coral species, which are the main contributors to reef complexity and serve as home to many species of invertebrates and fish, are also more sensitive to disturbance and gradually disappeared from the Low Isles reefs.

At the same time, soft corals, which do not contribute to reef buildup and even deter stony corals, are taking over much of the reef area. Prof. Maoz Fine, of the Mina and Everard Goodman Faculty of Life Sciences at Bar-Ilan University and the Inter-University Institute for Marine Science, the study’s lead author, said:

“The degree to which reefs may shift from one state to another following environment change was overwhelming.

“The long-term implications of these changes highlight the importance of avoiding phase shifts in coral reefs which may take many decades to repair, if at all.”

According to Fine, the multi-year study also illustrates the importance of considering multiple factors in the decline, and potential recovery, of coral reefs, and the importance of tracking changes in community structure, as well as coral abundance, over long periods. Fine adds:

“This study went much beyond pure scientific work. Following in the footsteps of the pioneers of coral reef biology and ecology was an incredible and inspirational experience for us.”

Coral reefs are highly sensitive to environmental change. Multiple stressors, in isolation or in combination, may lead to dramatic deterioration that can result in the loss of reefs and their ecological services for many years.

In the future, the researchers hope to use the same methods to reconstruct data from other parts of the world where historical expeditions accurately documented similar communities.

Provided by: Bar-Ilan University [Note: Materials may be edited for content and length.]