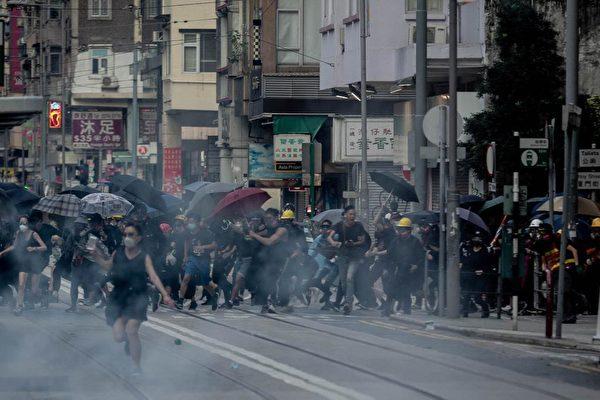 One demonstrator is in critical condition after a police officer shot him in the chest at close range during a rally on October 1. (Image: via Liu Qing / Epochtimes)

On October 1, the people of Hong Kong spontaneously held a rally and were met by large numbers of Hong Kong police who came to clear the scene. The police fired live ammunition at protestors in multiple locations. One police officer shot a protestor in his chest with his sidearm at point-blank range, leaving him in critical condition.

At around 4 p.m. in the Tsuen Wan district, a policeman pointed his weapon at one of the protestors, an 18-year old high school student, and fired at close range, hitting him squarely in the chest. The student shouted before losing consciousness and falling to the ground. He was taken to a nearby hospital where doctors removed the bullet that had punctured his left lung. He remains in critical condition and on life support.

The officer who fired the shot insisted that his actions were justified and that he was protecting fellow officers, but why couldn’t he have used less lethal means, such as a baton, instead of turning his weapon on the young man and firing at point-blank range?

In total, 74 people were wounded during the demonstration and sent to local hospitals. Two are in serious condition, 21 are in stable condition, and 46 were treated and discharged. The status of three individuals is unknown.

The following is a video of the shooting incident: