Scientists Are One Step Closer to a Fully Functioning Quantum Computer 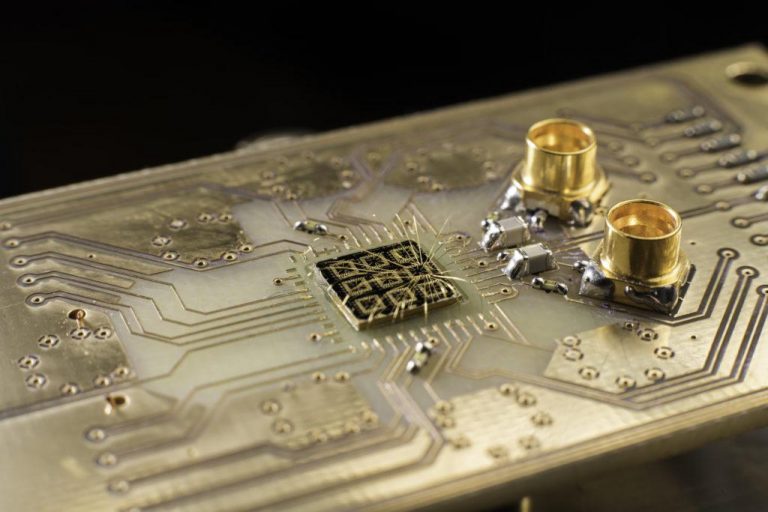 The researchers fabricate the device by patterning and depositing metal gates on a chip. (Image: University of Rochester photo / J. Adam Fenster)

Quantum computing has the potential to revolutionize technology, medicine, and science by providing faster and more efficient processors, sensors, and communication devices. But transferring information and correcting errors within a quantum system remains a challenge to making an effective quantum computer.

In a paper published in the journal Nature, researchers from Purdue University and the University of Rochester, including John Nichol, an assistant professor of physics, and Rochester Ph.D. students Yadav P. Kandel and Haifeng Qiao, demonstrate their method of relaying information by transferring the state of electrons.

The research brings scientists one step closer to creating fully functional quantum computers and is the latest example of  Rochester’s initiative to better understand quantum behavior and develop novel quantum systems. The University recently received a $4 million grant from the Department of Energy to explore quantum materials.

A quantum computer operates on the principles of quantum mechanics, a unique set of rules that govern at the extremely small scale of atoms and subatomic particles. When dealing with particles at these scales, many of the rules that govern classical physics no longer apply and quantum effects emerge; a quantum computer is able to perform complex calculations, factor extremely large numbers, and simulate the behaviors of atoms and particles at levels that classical computers cannot.

Quantum computers have the potential to provide more insight into principles of physics and chemistry by simulating the behavior of matter at unusual conditions at the molecular level. These simulations could be useful in developing new energy sources and studying the conditions of planets and galaxies or comparing compounds that could lead to new drug therapies. Nichol said:

“You and I are quantum systems. The particles in our body obey quantum physics. But, if you try to compute what happens with all of the atoms in our body, you cannot do it on a regular computer.

“A quantum computer could easily do this.”­­­

“It turns out that almost all of modern cryptography is based on the extreme difficulty for regular computers to factor large numbers.

“Quantum computers can easily factor large numbers and break encryption schemes, so you can imagine why lots of governments are interested in this.”

A regular computer consists of billions of transistors, called bits. Quantum computers, on the other hand, are based on quantum bits, also known as qubits, which can be made from a single electron. Unlike ordinary transistors, which can be either “0” or “1,” qubits can be both “0” and “1” at the same time.

The ability for individual qubits to occupy these “superposition states,” where they are simultaneously in multiple states, underlies the great potential of quantum computers. Just like ordinary computers, however, quantum computers need a way to transfer information between qubits, and this presents a major experimental challenge. Nichol said:

“A quantum computer needs to have many qubits, and they’re really difficult to make and operate.

“The state-of-the art right now is doing something with only a few qubits, so we’re still a long ways away from realizing the full potential of quantum computers.”

All computers, including both regular and quantum computers and devices like smartphones, also have to perform error correction. A regular computer contains copies of bits so if one of the bits goes bad, “the rest are just going to take a majority vote” and fix the error.

“So you have to be very clever about how you correct for errors. What we’re doing here is one step in that direction.”

Quantum error correction requires that individual qubits interact with many other qubits. This can be difficult because an individual electron is like a bar magnet with a north pole and a south pole that can point either up or down.

The direction of the pole — whether the north pole is pointing up or down, for instance — is known as the electron’s magnetic moment or quantum state. If certain kinds of particles have the same magnetic moment, they cannot be in the same place at the same time. That is, two electrons in the same quantum state cannot sit on top of each other. Nichol said:

“This is one of the main reasons something like a penny, which is made out of metal, doesn’t collapse on itself.

“The electrons are pushing themselves apart because they cannot be in the same place at the same time.”

If two electrons are in opposite states, they can sit on top of each other. A surprising consequence of this is that if the electrons are close enough, their states will swap back and forth in time.

“They did not switch places, but their states switched.”

To force this phenomenon, Nichol and his colleagues cooled down a semiconductor chip to extremely low temperatures. Using quantum dots — nanoscale semiconductors — they trapped four electrons in a row, then moved the electrons so they came in contact and their states switched.

“There’s an easy way to switch the state between two neighboring electrons, but doing it over long distances — in our case, it’s four electrons — requires a lot of control and technical skill.

“Our research shows this is now a viable approach to send information over long distances.”

Transmitting the state of an electron back and forth across an array of qubits, without moving the position of electrons, provides a striking example of the possibilities allowed by quantum physics for information science. Michael Manfra, a professor of physics and astronomy at Purdue University, said:

“This experiment demonstrates that information in quantum states can be transferred without actually transferring the individual electron spins down the chain.

“It is an important step for showing how information can be transmitted quantum-mechanically — in manners quite different than our classical intuition would lead us to believe.”

Nichol likens this to the steps that led from the first computing devices to today’s computers. That said, will we all someday have quantum computers to replace our desktop computers?

“If you had asked that question of IBM in the 1960s, they probably would’ve said no, there’s no way that’s going to happen.

“That’s my reaction now. But, who knows?”

Provided by: Lindsey Valich, University of Rochester [Note: Materials may be edited for content and length.]