The Majority of German Children Carry Plastic Pollutants in Their Bodies 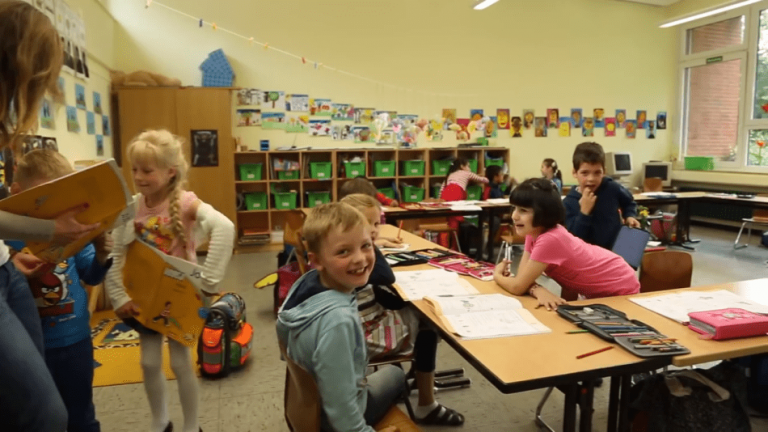 The German Environment Ministry recently published a study that showed the country’s children had alarming levels of plastic in their bodies. (Image: Screenshot / YouTube)

The German Environment Ministry recently published a study that showed the country’s children have alarming levels of plastic pollutants in their bodies. The study comes as the government is planning to curtail plastic usage in society.

The study was conducted on 2,500 children aged 3 to 17 years in the period between 2014 and 2017. It found that plastic byproducts were present in almost 97 percent of urine and blood samples. Traces of 11 of the 15 plastic ingredients investigated in the study were found in the children. It is believed that the plastics might have gotten inside their bodies from food packaging, cleaning products, cooking utensils, and waterproof clothing.

“One of the identified chemicals, perfluorooctanoic acid, often used in the manufacturing of outdoor clothing and non-stick pans, was found to be carcinogenic in animal trials. The EU passed a total ban on the substance going into effect in 2020,” according to Futurism. The chemical is also extremely toxic to the liver and does great damage to the reproductive system.

The presence of plastic byproducts in bodies also increases the possibility that the children could end up being obese. Some of the kids may also face developmental issues. The study found that the youngest were likely to be more affected by plastic ingestion. Children in poorer families were at higher risk of such contamination compared to those in high-income homes.

“It is very concerning that the youngest children, as the most sensitive group, are also the most affected… It can’t be that every fourth child between three and five years old is so heavily burdened with chemicals that long-term damage cannot safely be ruled out,” Bettina Hoffmann, Green Party environmental health expert, said in an interview (DW).

The German Environment Ministry has drafted a bill that will stop the usage of single-use plastic bags. Minister Svenja Schulze stated that the time is right for such a ban and that the public will appreciate such a move. Businesses that do not adhere to the rules of the ban could face fines of up to US$110,000. A 6-month transition period will be provided so that businesses can cut down their remaining plastic bag stocks.

However, certain environmental groups have criticized the ban for being too limited in scope. “The planned ban in 2020 does not cover the very thin tear-off plastic bags commonly found at supermarket fruit and vegetable counters. The fear (of the ministry) is that banning them would lead growers to pre-package fruits and greens in bulk in plastic, which could ultimately lead to more food wastage,” according to The Local.

Back in 2016, the German government had begun encouraging retail businesses to stop giving away plastic bags for free. By 2018, the efforts succeeded in cutting down the use of plastic bags from 68 per capita to 24 per capita. By doing so, Germany has already exceeded the EU’s expectations of 40 bags per person by 2025.

In March this year, the EU parliament voted overwhelmingly in favor of a ban that will stop the use of single-use plastic items like forks, knives, straws, and so on. Though disposable utensils will not be banned completely, the policy calls for using utensils made from sustainable materials whenever conditions allow for it. The ban will be implemented in 2021.