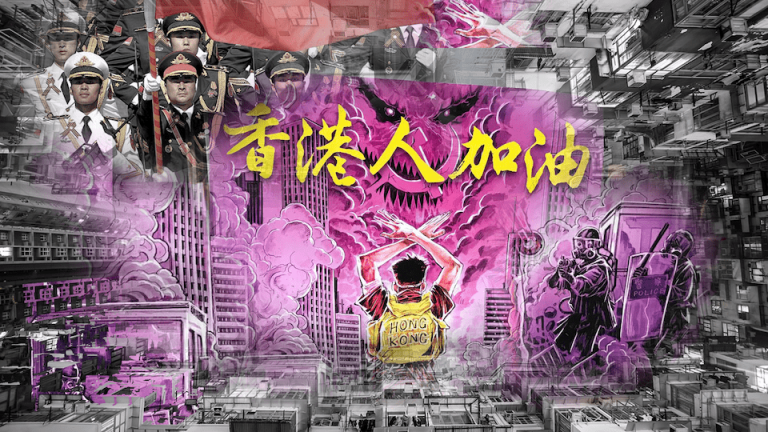 While almost perfectly choreographed celebrations took place in China, the gloom of suppression and violence weighed heavily on the mood of those in Hong Kong. (Image: Nspirement)

The October 1 celebration in Mainland China celebrates its yearly commemoration of the founding of the Republic of China. As part of a 7-day holiday, which is known as the “Golden Week,” the military is reviewed, ceremonies are held, and fireworks light the sky in what seems to be a harmonious and joyful celebration for all.

But nothing could be further from the truth. While the display of military power, music, dance, and festivities may cheat the eyes of outside observers, the true reality under it all is far different.

Close your windows and hide all scissors

During these times of celebration in the Chinese mainland, all the shops in Beijing that sell knives or scissors are closed. Also, a lot of people who live along Changan Avenue are forced to keep their windows closed during this seemingly happy time.

Democracy advocates critical of the Chinese regime question the government’s ability to prosperously rule its people if they essentially show such great signs of fear toward their own people by setting up such tight measures and regulations during a time of celebration and festivity. What is the Chinese regime so afraid of?

Is it the free will of their people? Is it the public eye of tourists and the world, who might get a chance to peek behind the scenes of the parody if they were allowed to open the windows to their thoughts about the ruling forces on the mainland?

Hong Kong canceled the two pillars of its October 1 celebration

Hong Kong usually celebrates October 1 in unison with the mainland; however, this year, due to the escalating protests and disfavor of most of its citizens regarding the mainland, the nightly fireworks were canceled. Even the public daytime activities organized by the government, such as parades and dances where the Chinese “red flag” is usually carried, didn’t take place in HK this year.

Hong Kong’s government claimed the reason was public safety concerns. “In view of the latest situation and having regard to public safety, the National Day Fireworks Display originally scheduled to take place at Victoria Harbour in the evening of October 1 [Tuesday] will be canceled,” the Leisure and Cultural Services Department wrote in a statement on Wednesday.

The implications of celebration and abstinence

Those in full homage to the mainland of China may see Hong Kong’s decision as an insult to their “red flag.” Those, however, who have been risking their jobs, lives, and sanity for the past 15 weeks and more may see this as the first breeze of hope in a hot dessert of unrest sparked by a “soon to be withdrawn extradition bill” that would have allowed case-by-case “fugitives” to be transferred to China.

It comes at a time where the majority of Hong Kong citizens, both old and young, are clearly attempting to liberate themselves from any associations related to the mainland, its narratives, and China’s very much disliked propaganda.

How do Hong Kong’s people see their future?

In the light of hope, when listening to the recently published Song of Hope, which can be heard being sung by protesters on the streets, in churches, and in malls, Hong Kong’s democracy-loving citizens see themselves free of Beijing’s encroachment, their freedom of speech liberated by a democratic legislature, and the alleged police brutality and surveillance taken under legal scrutiny by the government.

Meanwhile, on the mainland, the ongoing celebration during the golden week marked the Communist Party’s 70th year of rule.

Depending on which track record you might be judging the last 70 years by, this could be seen by some with a seemingly fading smile or a running-tear against the backdrop of millions of lives and their blood, which for many citizens critical of the regime literally paints this global superpower’s flag red.

You may wonder how much this celebratory mood is shared by those Chinese citizens who ended up drawing the short end of the straw – human rights advocates, persecuted minorities, prisoners of conscience, and the citizens of Hong Kong.

Is the seeming progress in Hong Kong a sign of change or merely the result of a moment of distraction, during which Bejing possibly has more pressing “internal matters” to tend to, like this year’s Golden Week and winning over the favor of the Chinese masses with glitter and glamor, almost parodic military parades and dances under the gaze of the world’s most advanced surveillance system — sky net.

In the light of Beijing’s “carefully-choreographed projection of national unity and power,” it seems as though what is a bright burst of light and hope for Hong Kong has become a great shadow cast over the mainland’s almost theatrically imposed ceremony.

While flexing its military muscles, during the showcasing of the country’s technology, the regime’s leader, Xi Jinping, said: “No force can shake the status of this great nation”.

It is not expressively clear whether Xi is referring to the pressure being exerted by the US with its trade policies or the Hong Kong protesters with their demand for democratic rights and sovereign means of governing the democratic freedoms and interests of its citizens.

For some fireworks, for others rubber bullets and tear gas

As the CCP’s 70th anniversary progressed in Beijing, dissidents were silenced with authoritative means, and supporters were rewarded with carefully-choreographed travesties, as protesters took to the streets of Hong Kong to call for seemingly everything the CCP and mainland regime do not stand for.  Ironically, many protesters in Hong Kong were rewarded richly with teargas, rubber bullets, police violence, and arrests.

The following is the number of recorded incidents between Hong Kong police and protesters during just one day on October 1, 2019:

The emotions felt by the majority of citizens on the mainland and in Hong Kong, this October 1st have never painted an emotional picture as contrasty as this year.

While people in support of the CCP on the mainland seemingly experienced delight, amusement, and entertainment, their brethren in Hong Kong, and anyone who supported democracy, human rights, and freedom of speech, experienced emotions of fear, anger, and anxiety, while many of the younger HK protesters during interviews even expressed their disgust toward the CCP and its followers.

Every coin has two sides, and every harmony consists of a balance. Unfortunately, certain forces in this world, their destructive attitude, their suppressive mentality, their unethical content, or lack of moral restraint seem to cast our world into chaos and disharmony. — Hexiarmin

Each person will have to judge the merits of democracy vs. a totalitarian regime within their own hearts.

In this setting, the following quote by Immanuel Kant, an influential German philosopher from the age of Enlightenment, is most befitting to conclude the theme of this article: