Mysteries of the Galaxy: Massive Bubbles Discovered in Milky Way 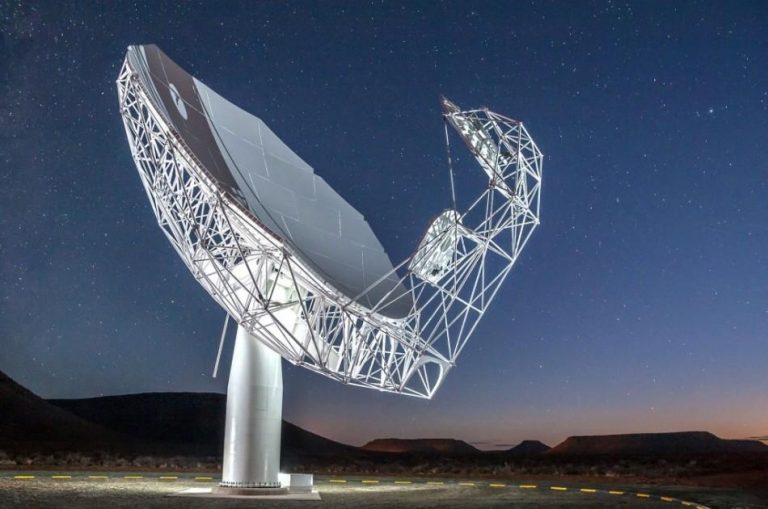 Using the MeerKAT telescope, an international team of scientists has just discovered two massive bubbles at the center of our Milky Way Galaxy. (Image: via Wikipedia)

An international team of scientists has just discovered two massive bubbles at the center of our Milky Way Galaxy. The bubbles appear to be joined in the shape of an hourglass. It is hypothesized that these are the remnants of a huge cosmic explosion that took place in the galaxy some 7 million years ago. The findings have been published in the journal Nature.

The huge bubbles measure about 1,200 light-years and are located near a supermassive black hole called Sagittarius A* at the heart of the Milky Way. Back in the 1980s, scientists discovered that the black hole was shooting out energetic filaments. The recent findings suggest that the filaments lie in the bubbles and that the activity that resulted in the formation of the bubbles is also responsible for energizing the filaments.

However, the reason the filaments and bubbles have formed is unclear. “One possibility is that Sagittarius A* spit them out millions of years ago after it went on a sort of feeding frenzy, expelling some of the gobbled-up mass in a violent eruption. Another is that a cluster of stars formed at around the same time, generating an intense amount of energy that was blasted out to create the bubbles,” according to NBC News.

The bubbles were discovered at the South African Radio Astronomy Observatory (SARAO) using the MeerKAT telescope. Until their recent detection, the bubbles remained hidden due to the bright radio emission that was coming from the center of the galaxy. Back in 2010, researchers found two giant bubbles located above and below the galaxy with a combined length of 50,000 light-years. They are thought to have been formed due to the galaxy’s central supermassive black hole.

“These fascinating radio bubbles provide a new window into understanding recent activity at the galactic center… Other observations taken across the electromagnetic spectrum have revealed evidence for a burst of activity several million years ago, and these new observations provide another clue. Taken together, the results show that the Milky Way blows bubbles on different scales,” Andrew Fox, an astronomer at the Space Telescope Science Institute in Baltimore, Maryland, said to Astronomy.

Using measurements provided by the European Space Agency’s Gaia satellite and NASA’s Hubble Telescope, scientists have recently come up with what they believe is an accurate estimation of our galaxy’s mass. While Hubble is able to measure fainter stars and distant clusters, Gaia is capable of creating a 3D map of astronomical objects and tracks their movements.

To arrive at the new results, scientists measured the movement of globular star clusters, which refers to isolated spherical islands that contain thousands of stars that orbit the center of the galaxy. These global clusters contain some of the oldest known stars formed just a few hundred million years after the Big Bang.