The Remarkable Rideau Canal in Canada 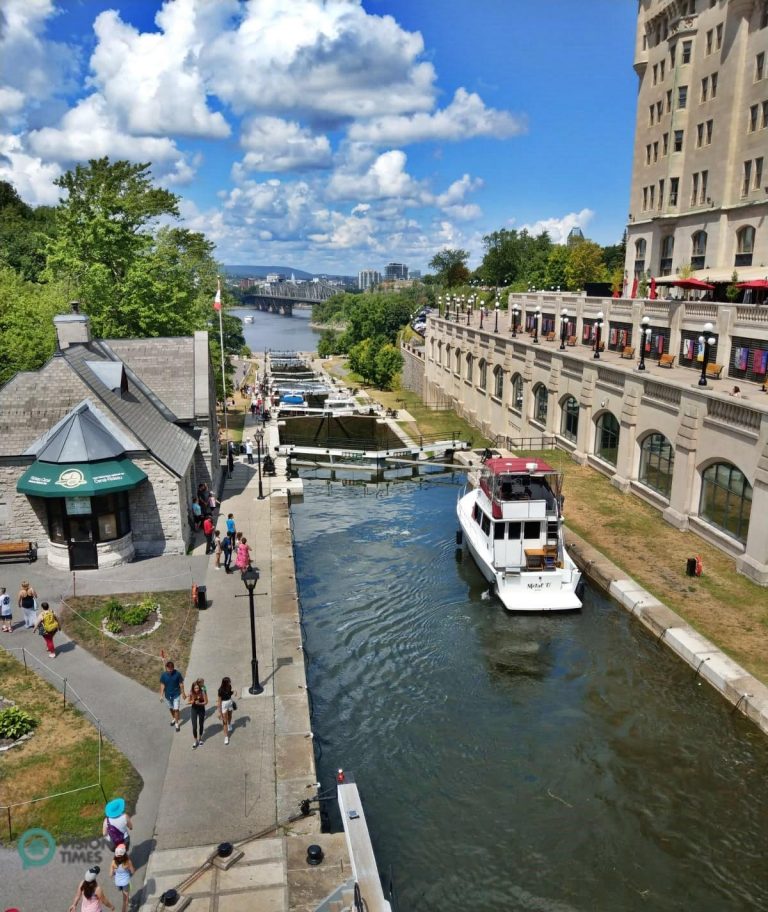 The Rideau Canal was registered as a UNESCO World Heritage Site in 2007. (Image: David Bohatyretz / Nspirement)

The Rideau Canal (麗都運河), also known as the Rideau Waterway (麗都水道), is a historical scenic waterway connecting the towns of Kingston and Ottawa in Ontario, Canada. The name “Rideau” is French for a curtain. The canal was so named due to the appearance of the twin waterfalls where the Ottawa River meets the Rideau River.

Please watch the following short video of the Rideau Canal.

With 47 locks, 16 lakes, two rivers, and a dam, the Rideau Canal was built from 1827 to 1832 for military purposes. It is 202 km (126 miles) long and is the oldest continuously operating canal in North America. It’s still in use today, but mainly for pleasure boating.

It was officially opened in 1832, designated a National Historic Site of Canada in 1925, and marked with a federal plaque in 1926, 1962, and, 2013 respectively. In 2007, it was registered as a UNESCO World Heritage Site, recognizing it as a work of human creative genius. It is one of the 20 UNESCO world heritage sites in Canada.

One of the most important features of the Rideau Canal is its locks, which were built to overcome elevation changes ranging from 50 meters (164 feet) to 83 meters (273 feet) between the Ottawa River and Lake Ontario.

Originally, the Rideau Canal’s locks were designed simply for the passage of small barges. Colonel John By eventually persuaded his superiors to authorize the construction of a series of much larger locks with a minimum size of 40.8 meters (134 feet) long and 10 meters (33 feet) wide, making it possible for new generations of ships on the Great Lakes to pass through the locks.

The flight of eight locks at the Ottawa Lock station is the largest single set of locks on the Rideau system. These massive locks connecting the Ottawa River and the Rideau Canal can still be manually operated.

It is fascinating to observe Park Canada employees crank the cast iron winches manually to open and close the gates to let pleasure boats through. Among others, the Plaza Bridge in the Parks Canada Lockstationt is a great location to watch the beautiful flight of the locks.

The lakes and rivers of the Rideau Waterway are great locations for fishing, canoeing, kayaking, and motor and sailboating. With its natural beauty, the pathways and the adjacent areas along the two sides of the Rideau Canal are popular destinations for biking, hiking, walking, and other outdoor activities in summer.

In winter, a section of the historical scenic waterway near central Ottawa is transformed into a great skating rink. With a surface area equivalent to about 90 ice hockey rinks, it was certified by the Guinness Book of World Records as the largest naturally frozen ice rink in the world in 2005. Having a total length of 7.8 km (4.8 mi), it’s also the world’s second-longest rink.

Today, the Rideau Canal is a popular destination in all four seasons. Not only can people go there to do a wide variety of leisure activities. Visitors can also check out the locks, blockhouses, and the defensible lockmasters’ residences along the waterway to learn about the remarkable engineering achievements in the early 19th century and its impact on the development of Canada.

Additionally, the Canadian Tulip Festival held along the picturesque Dows Lake section of Rideau Canal and the adjacent Commissioners Park in May, and the Ottawa Ice Dragon Boat Festival held on the historic Rideau Canal Skateway in February, always attract many visitors each year.