Are Black Holes Really Made of Dark Energy? 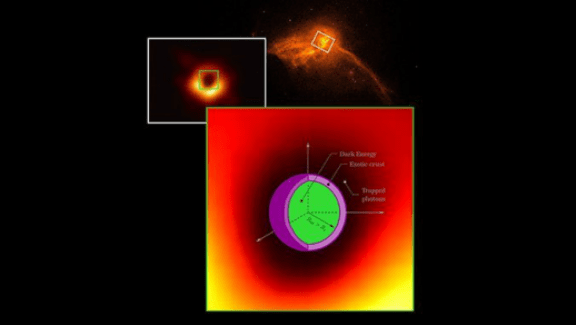 Objects like Powehi, the recently imaged supermassive compact object at the center of galaxy M87, might actually be GEODEs. The Powehi GEODEs, shown to scale, would be approximately 2/3 the radius of the dark region imaged by the Event Horizon Telescope. This is nearly the same size expected for a black hole. The region containing Dark Energy (green) is slightly larger than a black hole of the same mass. The properties of any crust (purple), if present, depend on the particular GEODE model. (Image: EHT collaboration; NASA / CXC / Villanova University)

Two University of Hawai’i at Mānoa researchers have identified and corrected a subtle error that was made when applying Einstein’s equations to model the growth of the universe which didn’t take into account certain characterists of dark energy.

Physicists usually assume that a cosmologically large system, such as the universe, is insensitive to details of the small systems contained within it. Kevin Croker, a postdoctoral research fellow in the Department of Physics and Astronomy, and Joel Weiner, a faculty member in the Department of Mathematics, have shown that this assumption can fail for the compact objects that remain after the collapse and explosion of very large stars. Croker said:

“For 80 years, we’ve generally operated under the assumption that the universe, in broad strokes, was not affected by the particular details of any small region.

“It is now clear that general relativity can observably connect collapsed stars — regions the size of Honolulu — to the behavior of the universe as a whole, over a thousand billion billion times larger.”

This result is significant since it reveals unexpected connections between cosmological and compact object physics, which in turn leads to many new observational predictions. One consequence of this study is that the growth rate of the universe provides information about what happens to stars at the end of their lives.

Astronomers typically assume that large stars form black holes when they die, but this is not the only possible outcome. In 1966, Erast Gliner, a young physicist at the Ioffe Physico-Technical Institute in Leningrad, proposed an alternative hypothesis that very large stars should collapse into what could now be called Generic Objects of Dark Energy (GEODEs).

GEODEs contain dark energy instead of a singularity

These appear to be black holes when viewed from the outside but, unlike black holes, they contain dark energy instead of a singularity. In 1998, two independent teams of astronomers discovered that the expansion of the Universe is accelerating, consistent with the presence of a uniform contribution of dark energy.

It was not recognized, however, that GEODEs could contribute in this way. With the corrected formalism, Croker and Weiner showed that if a fraction of the oldest stars collapsed into GEODEs, instead of black holes, their averaged contribution today would naturally produce the required uniform dark energy.

The results of this study also apply to the colliding double star systems observable through gravitational waves by the LIGO-Virgo collaboration. In 2016, LIGO announced the first observation of what appeared to be a colliding double black hole system. Such systems were expected to exist, but the pair of objects was unexpectedly heavy — roughly five times larger than the black hole masses predicted in computer simulations.

Using the corrected formalism, Croker and Weiner considered whether LIGO-Virgo is observing double GEODE collisions, instead of double black hole collisions. They found that GEODEs grow together with the universe during the time leading up to such collisions. When the collisions occur, the resulting GEODE masses become four to eight times larger, in rough agreement with the LIGO-Virgo observations.

Croker and Weiner were careful to separate their theoretical result from observational support of a GEODEs scenario, emphasizing that “black holes certainly aren’t dead. What we have shown is that if GEODEs do exist, then they can easily give rise to observed phenomena that presently lack convincing explanations. We anticipate numerous other observational consequences of a GEODEs scenario, including many ways to exclude it. We’ve barely begun to scratch the surface.”

The study, Implications of Symmetry and Pressure in Friedmann Cosmology: I. Formalism, is published in The Astrophysical Journal.