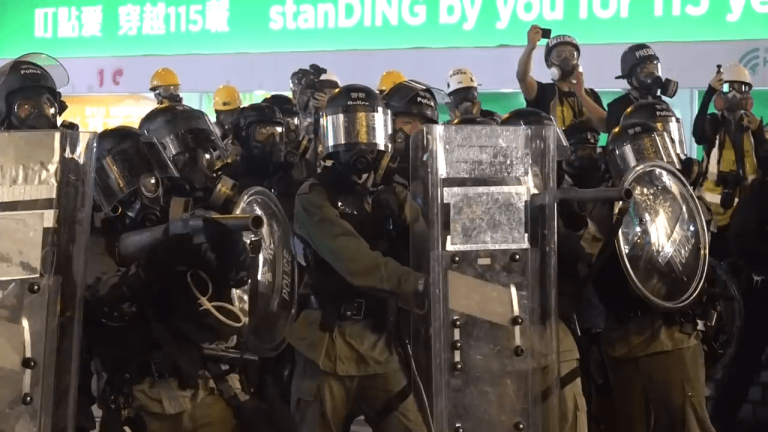 The police are becoming increasingly aggressive toward the protestors. (Image: Screenshot / YouTube)

The Hong Kong police have taken their crackdown on the anti-extradition bill protestors to a whole new level in the past few weeks, brazenly arresting and even shooting people. With protestors refusing to back down, the Chinese Communist Party (CCP)-backed police seem to have readied themselves to commit any act of violence to “restore order” in the city.

At a protest that took place on September 29, police took a protestor into custody, tied his hands, and put a gun on his back, as if to threaten the other demonstrators. More than 146 people, including a 12-year-old, were reportedly arrested that day on suspicion of offenses ranging from the possession of weapons, unlawful assembly, and assaulting police officers.

On October 1, an even bigger conflict took place between officers and protestors. This time, some of the protestors were armed with poles, projectiles, and petrol bombs to fight back, just in case the officers charged them. The police made 269 arrests that day, the highest ever since the protests began. Over 100 people were taken to the hospital to get treated for their injuries.

During a clash, an officer fired a bullet into the chest of an 18-year-old named Tsang Chi-kin. As he lay on the ground, the teenager cried out that his chest was hurting. Blood was gushing out from the chest. As news of the bullet shot spread, the protestors became even more violent, calling the officers “Dirty Cops.” “If they killed someone, that means we get to kill them. An eye for an eye and a life for a life… More people will die,” a protestor said to the Los Angeles Times.  The chief of police, Stephen Lo, condemned the protestors and called the shooting “lawful and reasonable.”

Though the police have used rubber bullets previously against the protestors, this is the first time that an injury from live rounds has occurred. October 1 saw the police fire 1,400 canisters of tear gas and 900 rubber bullets. Given that the department had only used about 1,000 tear gas canisters in the first two months of the demonstrations, firing 1,400 in a single day shows the aggressive approach now adopted by the department.

The police also seem to not care whether or not they hurt journalists when they start to use violence against the protestors. Recently, an Indonesian reporter, Veby Indah, was covering a demonstration when police fired in her direction. Even though a person had shouted to the police that a journalist was present, the officers still took the shot. One of the rubber bullets hit Indah’s right eye.

“Doctors treating Ms. Indah have informed her that regrettably the injury she received as a result of being shot by police will result in permanent blindness in her right eye… She was informed that the pupil of her eye was ruptured by the force of the impact. The exact percentage of permanent impairment can only be assessed after surgery,” Michael Vidler, Indah’s lawyer, said in a statement (The Guardian).

The Hong Kong Journalists Association has said that it will investigate the incident. The organization admitted that they were concerned about Indah’s injury since she was not in the immediate vicinity of the protestors. Indah was also clearly identifiable as a journalist as she was wearing high visibility press markings.