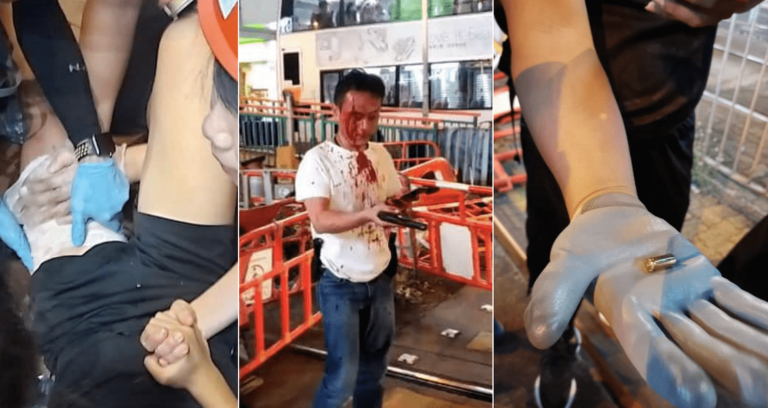 A 14-year-old boy has allegedly been shot by a police officer as protests continue to rage in Hong Kong, according to local media reports. (Image: Twitter)

A 14-year-old boy has allegedly been shot by a police officer as protests continue to rage over a mask ban in Hong Kong, according to local media reports. The boy is believed to have suffered a wound to the leg following the incident and is receiving medical treatment in the hospital. He is reported to be in a serious condition.

A source from the Hong Kong police told the South China Morning Post that a plainclothes officer who works for the criminal investigation department was said to be inside his private car in the city’s Yuen Long District at around 8 p.m. on October 4 when protesters spotted him and started to smash his car windows. The officer was then surrounded by a crowd and he opened fire during the chaos.

Footage shows bystanders screaming and fleeing after a gunshot was heard from the center of the crowd, thought to be fired by the officer. It was unclear if the boy was shot at the time. The officer was then attacked by activists who threw the first petrol bomb at him. As he was making phone calls to ask for support, activists hurled another petrol bomb. Police said the officer opened fire to protect his own life after being beaten to the ground by a large crowd and faced serious danger.

The incident marks the second use of gunfire in the last week by officers, who have more typically utilized tear gas and water cannon to disrupt protest action since it began in March.  Earlier this week, an activist was shot in the chest by police firing live rounds, with officials confirming an officer had opened fire in the Tsuen Wan area, and that a protester had been hit. It was last reported that he was in a critical condition at Princess Margaret Hospital in Kwai Chung.

The latest shooting incident occurred as the city’s leader Carrie Lam invoked a colonial-era emergency law to prohibit protesters from wearing masks. Many pro-democracy demonstrators have worn face masks to hide their identities and shield themselves from the tear gas that has been a regular occurrence on the streets across the city.

Lam’s latest move aims to curb the city’s escalating violence caused by anti-government demonstrations, which have lasted for nearly four months. The ban was passed under a colonial-era emergency law known as The Emergency Regulations Ordinance.  The law, a relic of British rule enacted in 1922 to quell a seamen’s strike and was last used to crush riots in 1967, gives broad powers to the city’s chief executive to implement regulations in an emergency.

She said the ban targeted violent protesters and rioters and “will be an effective deterrent to radical behavior.” The decision applies to people at “illegal” gatherings who use violence and exempts those who wear masks for “legitimate need.” Lam said she would go to the legislature later to get legal backing for the rule. But a government document detailing the move says it will not only cover unauthorized or illegal assemblies, but also apply to gatherings approved by the police.

The city’s Secretary for Security John Lee Ka-Chiu said the mask ban would carry a jail sentence for up to one year or a fine of up to HK$25,000 (US$3,188).  He said protesters would also be prohibited from painting their faces to hide their identity. He added police would have the power to ask a person to remove their mask and those who resist can be sentenced for up to six months. The ban covers any procession with over 30 people and assemblies of more than 50 people, according to Lee.

Analysts have warned that the use of the ordinance for the first time in more than half a century could set a dangerous precedent. Activists and many legislators are also concerned the ban could be counter-productive, impractical, and difficult to enforce in a city bubbling with anger, where tens of thousands have often defied police bans on rallies to take to the streets.

Immediately after Lam’s announcement, thousands of people defiantly did take to the streets — still with their faces covered — as they chanted “Hong Kongers, resist.”  One protester told reporters: “Will they arrest 100,000 people on the street? The government is trying to intimidate us, but at this moment, I don’t think the people will be scared.”