Kids Lovin’ It: The Coolest Ride to School 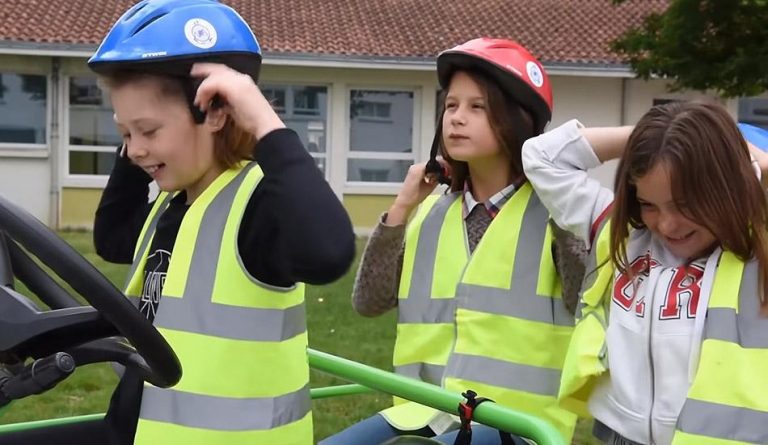 Amaury Piquiot is the founder of the nonprofit organization “S’Cool Bus,” which does something very special — it allows children to ride to school in what is essentially a large tandem bike. The service is currently operational only in France.

“Each S’cool Bus is 1.3 meters wide, 4 meters long, and carries ten children to school… The bus is steered by an adult driver and powered entirely by its passengers, most of whom pedal. The pedal-powered school bus is a powerful way of allaying the fears of parents reluctant to allow young children to cycle to school on the road. The 11-seat bus travels at a speed of about 10 mph and has an electric motor to help with hills,” according to ETA.

Piquiot got the idea of the S’Cool Bus when he visited the Dutch city of Nijmegen during an internship as a business school student. He saw a few of the bus/bike hybrids that were being used to transport kids and adults. When he got back home, Piquiot started developing the plan for his organization. Today, S’Cool Bus is a transportation service that is active in six towns in Normandy. It has hired qualified drivers and bus maintenance staff and also provides safety training for the kids.

Children always wear helmets and a vest when riding the vehicle. The bus is equipped with a safety net that counters any loss of balance. Since the S’Cool Bus is financed by public authorities, parents do not have to pay money to let their kids travel on the bus. As no fossil fuel is used, the transportation system is the greenest possible solution to get children to school. Plus, the bus raises the kids’ awareness of issues like environmental protection, road safety, teamwork, etc.

The vehicles are developed by Tolkamp Metaalspecials, a Netherlands-based fabrication company. The establishment has sold over 40 such kids’ buses. However, S’Cool Bus is the first organization to use it in public education. Given the success of S’Cool Bus, Piquiot and his partners are currently developing the organization’s own factory, which is expected to open in 2020 and put out its first S’Cool Bus on the streets by 2021.

In June, the French National Assembly approved the Mobility Orientation Law, which gives cycling a legal right in the country. One main focus has been to promote the activity of cycling among children. “The National Assembly adopted an official Learn to Ride (Savoir Rouler) educational program to ‘ensure that every child is able to ride a bike autonomously and safely in public spaces by the time he/she enters secondary school.’ The FUB hopes that this will lead to a cultural change in daily mobility choices,” according to ECF.

As roads get renovated, the local authorities have to think about creating and integrating new cycle routes. The state has planned to set aside €350 (US$382) million over the course of seven years together with annual endowment funds of €100 (US$109) million for developing cycling infrastructure projects. By 2021, a new national database called “Bicycode” will come into effect for new and old bicycles. In August, transport chiefs of Paris shared plans to create a suburban cycle network that will make it easier for people to travel by cycle into the city.