China: Home to the Biggest Floating Solar Power Plant in the World 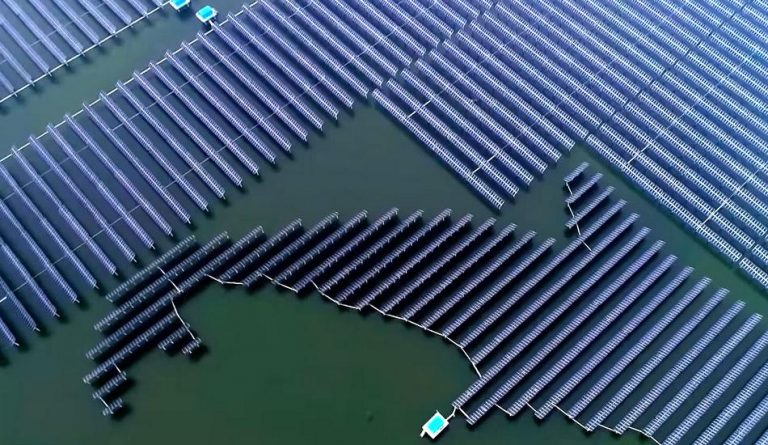 China has the biggest floating solar power plant in the world. (Image: YouTube/Screenshot)

The project was completed in late 2018, after which several tests were conducted to ensure that performance met requirements. An 18 kilometer 110V overhead line has been constructed for connecting the plant to the electric grid. It is projected to generate 77,693 MWh of electricity during the first year of operation, which is sufficient enough to power about 21,000 households. The entire system has been built using Ciel & Terre’s Hydrelio floats. These were manufactured locally to cut down logistics costs, increase local employment, and reduce emissions.

“The project uses monocrystalline modules from Chinese manufacturer LONGi Solar… Central inverters have also been put on stilt platforms on the shoreline of the quarry lake so as not to interfere with neighboring farm activity. Concrete poles support the electrical installation and 1,500 helical anchors were used for the project and buried at an 8-15 meter-depth to match the water body,” according to PV Tech.

There has been a growing interest in setting up floating solar power plants among various nations as they come with several advantages. For one, they do not take up any valuable space on land. Plus, the water’s cooling effect ensures that the panels run as optimally as possible. Since they block out sunlight, the plant also prevents water from getting evaporated, allowing it to be used for drinking or agriculture. Also, these solar farms are relatively easy to install and decommission.

On the downside, floating solar plants tend to be more expensive than land-based ones because of the additional costs involved in buying floats and highly resistant electrical components. If this extra cost can be negated in some way, floating solar power plants present an excellent way to generate clean electricity. In the future, such farms may prove critical when floating cities are constructed.

Thailand is set to build one of the largest floating solar power plant networks in the world. The Electricity Generating Authority of Thailand (EGAT), a state-owned corporation, will be setting up 16 floating solar farms at nine hydroelectric dam reservoirs by 2037. When completed, these farms are expected to generate 2.7 GW of electricity and will account for 10 percent of the country’s clean energy sources.

“As the cost of solar equipment comes down, many developers are looking at the water with grid connection… This seems to be a great combination of long-term and well-structured planning, with individual projects identified already,” Jenny Chase, head of solar analysis for BloombergNEF in London, said to the Bangkok Post.

In July, South Korea had announced plans to construct a 2.1 GW solar farm on a 30 square kilometer lake. The project is estimated to cost around US$3.9 billion. Work on the solar farm will start by the second half of next year once the regulatory review processes are finished. The government hopes that the project will help the country fulfill its aim of converting 20 percent of all energy sources to renewable by 2030. South Korea also plans on adding 38GW of total solar power by the end of the next decade.