Why You Will Never Go Thirsty in Rome 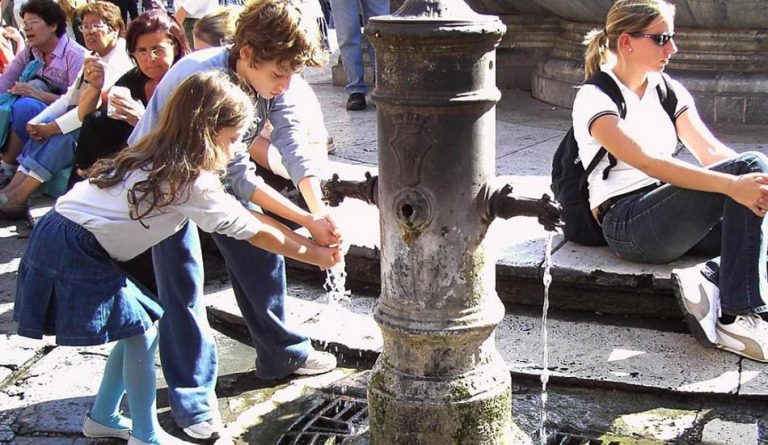 If you plan on traveling to Rome, rest assured that you won’t have to spend a penny buying bottled water. Rome has thousands of fountains spread throughout the city from where you can drink and collect water for free. Called “nasoni” (nasone) in Italian, these ancient fountains, when translated into English, become “large noses.”

The city of fountains

“The ice-cold water that flows perpetually out of this nasone is brought to the metropolis from 30 kilometers away, from Lake Bracciano, via a long aqueduct that was built by the ancient Romans… After the fall of the Romans, the aqueducts fell into disuse and crumbled away. They were restored only during the 17th and 18th centuries,” according to Amusing Planet.

Originally, they were installed to provide clean water to street markets. But today, they are a blessing for travelers and tourists. The nasoni gushes out water 24 hours a day since stopping the flow of water would cause the pipes to stagnate, thereby promoting the growth of bacteria that would contaminate the supply. However, water is never wasted. The unused portion is recycled and used for activities like cleaning factories and watering gardens.

To drink from a nasoni, all you need to do is to block the bottom hole in the structure. This will force the water to stream upwards, which you can directly drink or collect in a bottle. “Made of cast iron, the “nasoni” drinking fountains stand about three feet tall and weigh in at an impressive 200 lb. There are 2,500 of them scattered around the metropolitan area, and you can find some of the oldest in the Trastevere district,” according to Explore Italian Culture.

Acea, the company that manages Rome’s water, guarantees the quality of the water you drink from the nasoni. The company also has a webpage that helps you locate a nearby nasoni.

London seems to be following Rome’s example as the city opened up 50 drinking water fountains in July as a part of its £5m project aimed at providing free water from the Thames River to the public. The fountains are largely being installed in traffic-heavy areas like shopping centers, train stations, recreation grounds, markets, and so on. The London administration plans to install more than 100 such fountains all across the city by the end of 2020.

The Thames River is also tasked with maintaining the water fountains for a period of 25 years. “What consumers told us in our work on pilots was that they wanted to be able to refill their own bottles from fountains that were safe, accessible, visible — and working,” Shirley Rodrigues, deputy mayor for environment and energy, said to The Guardian.

The decision to install water fountains is also partly driven by the UK’s plastic crisis. According to estimates, an average Londoner buys more than 3 plastic bottles per week. The country uses almost 38.5 million plastic bottles every day, with only half of them recycled. Over 16 million bottles have to be burned or dumped into a landfill, while some end up in the oceans. This is obviously bad for the city in the long run.