Care for a Stroll Over the Devil’s Bridge in Germany? 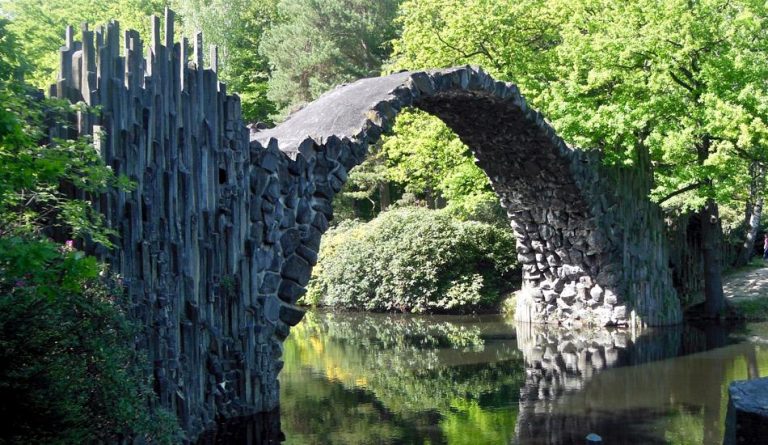 Sailing under the bridge is believed to unlock mystical abilities. (Image: svolks via wikipedia CC BY-SA 3.0)

In Kromlau Park, eastern Germany, there is a structure called the “Rakotzbrucke,” translated as the “Devil’s Bridge.” From the name, one might presume that it is an ominous bridge with a dreadful history. But on the contrary, anyone who sees the structure will be amazed at a unique feature — the reflection it makes on the water beneath.

“The most striking trait of this bridge is its parabola, designed as such to form one-half of a flawless circle. Therefore, when the waters beneath the bridge are calm and the light is right, it forms an illusion of a splendidly complete circle made of stone, the dream of any photographer,” according to The Vintage News.

The bridge was commissioned in 1860 by a local knight. There are many legends attributed to the construction of the bridge. According to one legend, the architect made a pact with the Devil in which he asked for the ability to build a very unique bridge. In exchange, the devil wanted the soul of the first person who would walk across the structure. (Okay, there is an ominous part.)

Native myths claim that a person who sails on a boat under the bridge during a full moon will be able to unlock his mystical abilities. People who look sideways from the bridge are warned that they would see the face of the devil. There are also people who think that the bridge is a portal that can take us to another world. (All right, it’s getting scary now.)

At present, the government does not allow the public to walk on the bridge. As it is old, the structure may not be able to take the weight of too much traffic and might eventually collapse. It is to preserve the bridge for future generations that walks have been banned. As such, you can only see the bridge from a distance, which in itself is a beautiful sight.

The bridge can be visited at any time of the year. However, “the best time to visit Rakotzbrücke is in the spring after the snow melts or ideally in the Autumn (August/September) when the fall foliage around the lake is really breathtaking,” according to The Whole World Is A Playground.

Rakotzbrucke is a few hours away from the German capital of Berlin. The easiest way to reach the bridge is by car. Though the bridge is free to visit, you may have to pay a parking fee for the vehicle. If you plan on using public transportation, take a train to Oberlausitz via Cottbus. Next, take a bus to Kromlau, Gablenz. Once at the destination, just walk 1 km and you should arrive at the bridge. However, do remember that buses may not run daily to Kromlau. So check up on the bus schedule before deciding to visit the place.

If you plan on exploring the region, consider stopping by at Gorlitz where Hollywood director Wes Anderson filmed the Grand Budapest Hotel. In Bavaria, Saxon Switzerland national park is a gorgeous place worthy of a visit.