Cosmic Insights: Planet 9 Might Be a Black Hole or a Bunch of Them 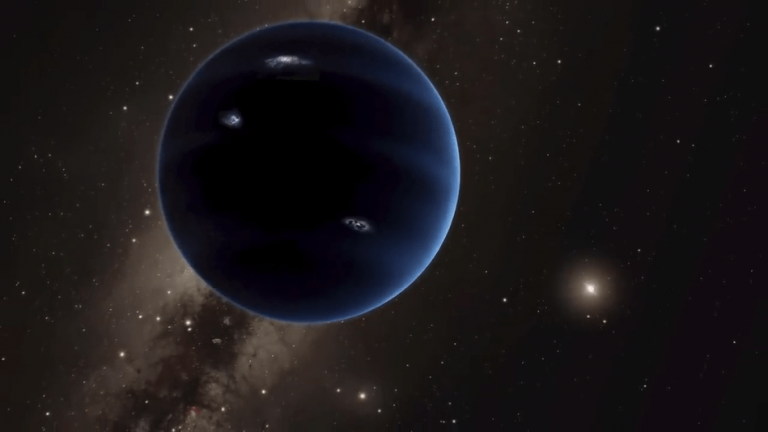 Researchers have theorized that there might be a mysterious planet, dubbed Planet 9, lurking somewhere and exerting a gravitational pull on objects in the Kuiper Belt. (Image: Screenshot / YouTube)

The orbit of objects in the Kuiper Belt located at the edge of the solar system tilts the same way and points in the same direction. As a result, researchers have theorized that there might be a mysterious planet, dubbed Planet 9, lurking somewhere and exerting a gravitational pull on the objects. A new theory suggests that instead of a planet, the force could be exerted by a primordial black hole tiny enough to be the size of a bowling ball.

A primordial black hole is a type of small black hole that is hypothesized to have formed during the Big Bang. Though their existence has not been validated, the consensus among the scientific community is that they not only exist, but that the universe is actually teeming with them. The new study looked at six objects in the Kuiper Belt and analyzed their orbits, while also taking into account observations that showed light traveling through the solar system was bending due to an unaccounted for object.

“The thing that we realized is that the gravity is the important thing… It doesn’t need to be a planet. The most mundane, or maybe the most sane explanation is that it’s a planet. But as theoretical physicists, we know that early-universe cosmology can very readily introduce a range of very interesting new theoretical bodies — one of which… is primordial black holes,” Jakub Scholtz, one of the two astronomers behind the idea, said to Live Science.

Researchers suggest that the primordial black hole might have ended up in our solar system due to the gravitational field of the sun. This black hole will likely be surrounded by a dense halo of dark matter. Scientists believe that any search for Planet 9 should now include a search for moving sources of gamma rays, x-rays, and other types of radiation, since this can help confirm the edges of a black hole. They theorize that it could be a single primordial black hole having a mass 10 times that of the Earth, or several black holes that add up to such mass.

The new theory has evoked deep interest in the scientific community. “It’s fun to have more possible targets for Planet 9… It’s an exciting possibility that a free-floating population of primordial black holes exists and the solar system captured at least one in the fairly distant past. From a theoretical standpoint, it’s exciting even if its plausibility right now is early to judge,” Bhuvnesh Jain, co-director of the Penn Center for Particle Cosmology at the University of Pennsylvania, said to NBC News.

In April, a team of scientists captured the first photo of a black hole. Now, they have started a project called the next-generation Event Horizon Telescope (ngEHT) that aims to capture real-time videos of a supermassive black hole located at the center of our galaxy named Sagittarius A*.

“We can see the black hole evolve in real time… Then we can understand how it launches these jets that come from its north and south poles. We can see how it evolves with the galaxy. We can even test Einstein’s gravity in completely different ways, by looking at the orbits of matter — not light, but matter — around the black hole,” Shep Doeleman, an astronomer who leads the global EHT team, said to Business Insider.

The Event Horizon Telescope is made up of several observatories located around the world that work together to operate as a single virtual telescope. The team aims to add more telescopes and include the latest technology to process data at 10 times the speed. The project is expected to capture videos of black holes in five years and has already received a grant of US$12.7 million from the National Science Foundation.