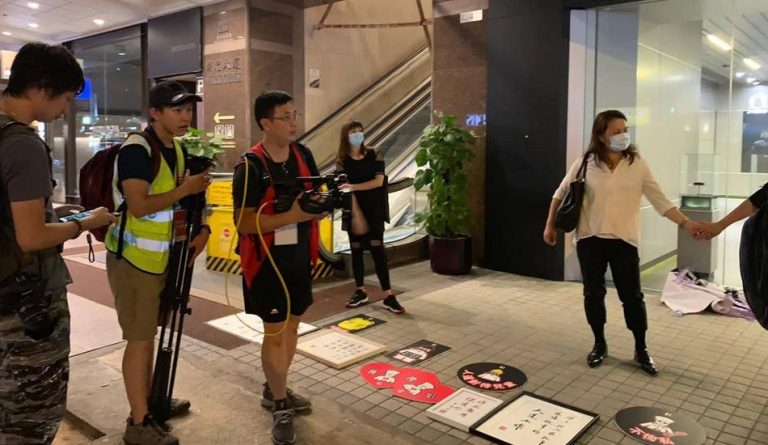 Not only have social workers in Hong Kong been supporting the protesters, they have also become a target of law enforcers. (Image: Mona Song / Nspirement)

Amid the reports of clashes between Hong Kong protesters and police, what many media leave out is the role of social workers. Not only have these people been supporting the protesters, they have also become a target of law enforcers.

Last month, social work students from various institutions and employees from the social welfare sector held a rally at Edinburg Place in Central. The purpose of the demonstration was to raise attention to the police harassment faced by them during protests. “The Federation of Social Work Students, which organized the rally, said the problem facing front-line social workers with regard to being needlessly arrested has been getting serious in recent days. The federation criticized the police for intentionally obstructing social workers from performing their duties,” according to EJ Insight.

When a group of doctors and nurses signed a statement in support of police actions, hundreds of anti-establishment medical workers formed a human chain to protest against the police and the government. They held placards and sang Glory to Hong Kong. Many nurses refused to sign the document as they wanted the police to explain why the officers were indiscriminately beating up civilians.

A group called the “Guardians” has made it their mission to “protect the children.” When they find that the protesters are likely to be beaten up by the police, the group moves in front of the protesters and act as a human barrier. Even when the police start using violence, the members do not flinch and stand their ground. “I have no regrets… I’m willing to take the blow for them. This whole protest needs everyone’s support. If you don’t come out today there may not be a tomorrow,” an 82-year-old member of the group said to The Guardian.

Just like the Guardians, several other volunteer groups are now coming forward to extend their support to the demonstrators. While doctors and nurses are offering free medical services, lawyers provide free legal consultations, pastors inspire them through sermons, and so on. Social workers also monitor social media to get real-time updates on how the various protests are progressing. Some walk with megaphones during the demonstrations, calling out the names of the protesters being arrested by the police so that lawyers can immediately seek them out and offer help.

Support from the poor

Though it might seem that the Hong Kong protests are fueled by upper and middle-class citizens, that is, in fact, a false characterization. Numerous people from even the poorer sections of society participate in the protests and extend support in their limited ways. “Even though we are poor, we still support the five demands,” a 73-year-old said to Reuters.

The five demands are the complete withdrawal of the extradition bill, withdrawal of characterizing some of the protests as “riots,” the formation of an independent commission to investigate police behavior, the unconditional release of all arrested protesters, and universal suffrage.

There is a good reason why poor people support the protests even though they struggle to make ends meet — hope. They believe that a democratic society gives them and their children a fairer chance for a better life. And now that hope is being crushed by the Chinese Communist Party.