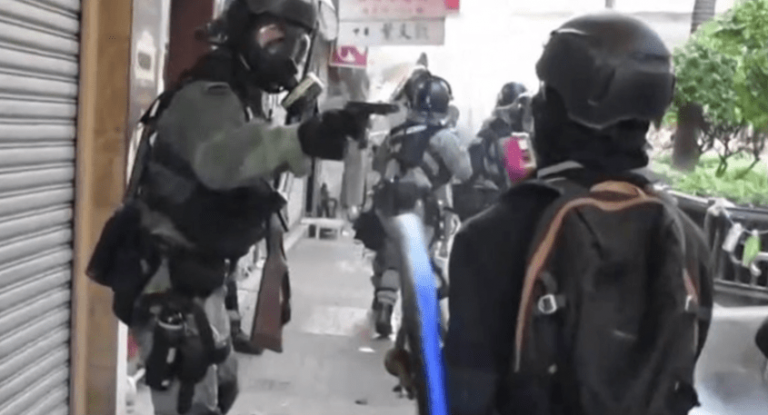 The shooting of an 18-year-old boy participating in the Hong Kong protests has caused huge outrage on social media. (Image: Screenshot / YouTube)

Recently, a police officer shot an 18-year-old boy participating in the Hong Kong protests. The incident caused huge outrage on social media, as this was the first time in the ongoing protests that deadly force was used by the state. China has gone on to justify the shooting, essentially arguing that the boy deserved it.

On October 1, high school student Tsang Chi Kin took part in the anti-extradition bill protests due to his growing concern for the future of his city. When things got heated, one of the officers shot Tsang in the chest. None of the officers came to attend the boy who was bleeding uncontrollably. One would assume that shooting a young student would be condemned by all people.

But since the Chinese government does not give any value to human rights, it put forward arguments in support of the violent act. The state-run Xinhua news agency wrote in an article that “rioters attacked police officers on a great scale… The life of the officer at the scene was under serious threat and he was forced to shoot at the assailant to protect his own life as well as his colleagues. [His] action was totally legal, legitimate, and appropriate.” (Vice)

Tsang was admitted to the hospital where he is still under treatment. Police went on to charge him for rioting and assaulting officers. However, the court granted him bail on the condition that he remains in the city. The case will return to court on November 14. Following Tsang’s hospitalization, hundreds of students and alumni from the Tsuen Wan Public Ho Chuen Yiu Memorial College, where he is a student, gathered in front of the school. They demanded that the government give public support for Tsang. However, the school has yet to condemn the police action.

”I understand the stance of the school and never expect the school to say anything anti-Beijing. But if the school fails to stand up against violence, police could escalate force in the future… He [the officer] held the gun for too long. It is more like a lethal attack. The student was just lucky to survive… For me, a condemnation of force is far from enough. The officer should be accountable through legal means,” a 35-year-old alumnus said to South China Morning Post.

China has been stationing troops near the Hong Kong border for the past several weeks. While it has been speculated that the Chinese military will intervene in the city to crack down on the protesters, Beijing has yet to take such an action. However, the Chief Executive of Hong Kong, Carrie Lam, recently admitted that the Chinese military could be deployed in the city.

“At this point in time, I still strongly feel that we should find the solutions ourselves… It is also the position of the central government [in Beijing] that Hong Kong should tackle the problem on her own… But if the situation becomes so bad, then no options can be ruled out if we want Hong Kong to at least have another chance… I cannot tell you categorically now under what circumstances we will do extra things, including calling on the central government to help,” she said in a statement (DW).

To prevent protesters from hiding their identities, Hong Kong has imposed an anti-mask law that bans people from covering their faces during demonstrations. The ban has been implemented in schools and universities as well, with teachers instructed to report students who wear masks. However, protesters continue to wear masks in public.