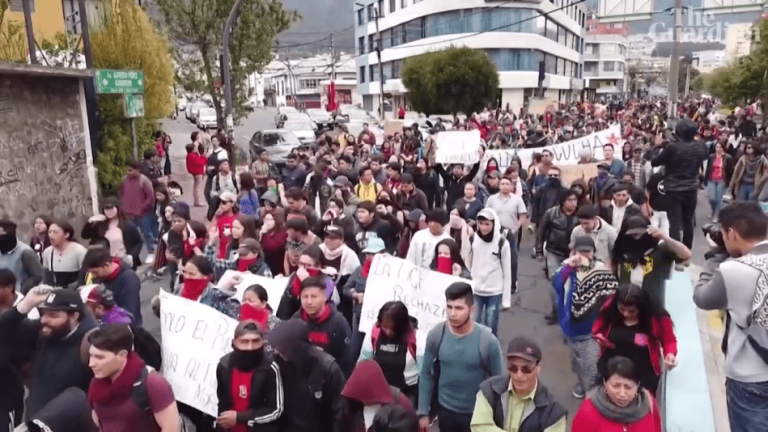 Ecuador’s President Lenín Moreno has moved his government from Quito to Guayaquil to escape escalating violent protests over the end of fuel subsidies. (Image: Screenshot / YouTube)

Ecuador’s President Lenín Moreno has moved his government from Quito to Guayaquil to escape escalating violent protests over the end of fuel subsidies.

Protesters armed with sticks, stones, and Molotov cocktails have been taking to the streets, ransacking and vandalizing public buildings, burning military vehicles, and clashing head-on with the police — running battles continue late into the night. Moreno announced a state of emergency on October 3.

The outnumbered security forces have been unable to prevent much of the destruction. On October 7, rioters forced their way into the comptroller general’s office and vandalized the assembly building. Ecuador’s congress says it was an “attempt to take over the seat of parliament.”

Hundreds of indigenous people also clashed with security forces and the military on October 7 as they marched toward the Presidential Palace in Quito. The military used tear gas to try to dispel crowds in the town of Machachi, which had barricaded roads with burning tires and sticks.

“More than 20,000 indigenous people will be arriving in Quito,” says Jaime Vargas, leader of the umbrella organization CONAIE — a key player in bringing down the government back in 2000.

Protesters from southern Andean provinces, as well as indigenous groups from the north, converged on Quito for a protest on Wednesday, October 9. There were large-scale clashes between protestors and the police.

Indigenous leaders claim that they have been holding several dozen soldiers since October 6.

Fuel subsidies had been costing Ecuador close to US$1.4 billion annually, according to official sources. Moreno lifted the subsidies on October 1 as part of a US$4.2 billion loan deal with the International Monetary Fund, leading transport unions to strike. The unrest quickly escalated to nationwide protests, as an overnight price hike increased gas prices by about a quarter while diesel prices more than doubled.

To date, the protests have left one civilian dead, 77 injured, and 570 detained, according to government figures.

Ecuador’s Ministry of Energy also announced on October 7 that three oil fields in the Amazon region had been closed “due to the seizure of the facilities by groups of people outside the operation,” according to AFP news agency.