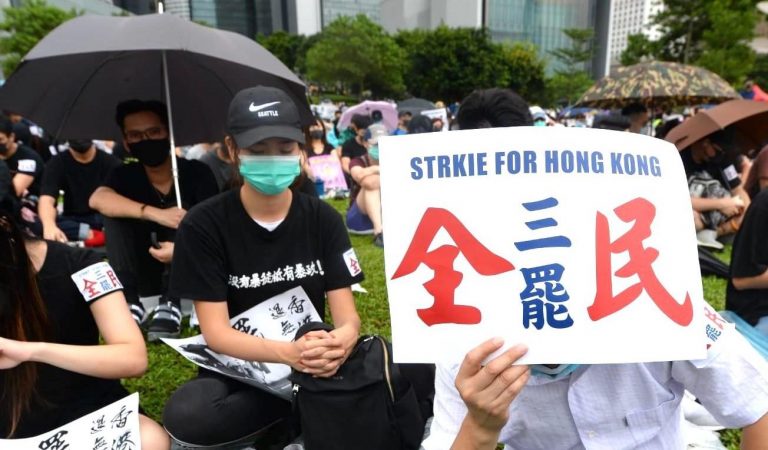 You may wonder why the sudden ban of masks during protests. Is it simply because the situation, “ a real emergency,” as Lam puts it, calls for this measure, or is there more to it than meets the eye? (Image: Li Jing / Nspirement)

On October 4, the Hong Kong government issued the Forbidden Masking Act. It is the latest measure in the government’s effort to suppress the protests in Hong Kong.  When announcing the measure, Carrie Lam described it as “a real emergency” and “a move on which we have discussed and which we consider necessary.”  This comes at a time in which there are also a growing number of accounts of police violence in Hong Kong toward protesters, even those who are peaceful.

Almost immediately after the announcement of the ban, thousands of protesters, with their faces covered, filled the streets of Hong Kong’s city center. The pro-democratic protesters were more determined than ever that their efforts will succeed in pushing back Beijing’s ever-tightening grip on Hong Kong.

It may be difficult to know whether the narrative projected by the Hong Kong government is sincere or dictated by Beijing. However, if one compares past narratives that were given by Beijing and the rest of the world as to why the people of Hong Kong are demonstrating, it becomes clear as to where the order originated.

The U.S. and rest of the world: “As China seeks to assert greater control over Hong Kong, the city regularly displays its penchant for protest.”

Many people are unaware of the technical advances in biometrical face recognition that have been made in China. Technologies related to surveillance and face recognition are more than just white papers. They are being implemented across China and used to apprehend whoever authorities define as a criminal. The difference in scrutiny standards between Hong Kong and Beijing and how each defines a criminal or terrorist act is a major impetus behind the protests. Here are some recent news reports related to how China may be using its facial recognition software and why this is a major concern for protesters in Hong Kong:

“Chinese police are sporting high-tech sunglasses that can spot suspects in a crowded train station, the newest use of facial recognition technology that has drawn concerns among human rights groups.” — Hong Kong Free Press

In light of the implications of how Bejing views the protests and reports about them to their people, you can understand why the majority of Chinese citizens denounce the pro-democracy movement in Hong Kong.

When played against the backdrop of how Hong Kong authorities are being pressured by Beijing to act against the pro-democracy movement, you can understand the fear of Hongkongers that democratic freedoms are being eroded with every new legislative act passed by the Hong Kong government.