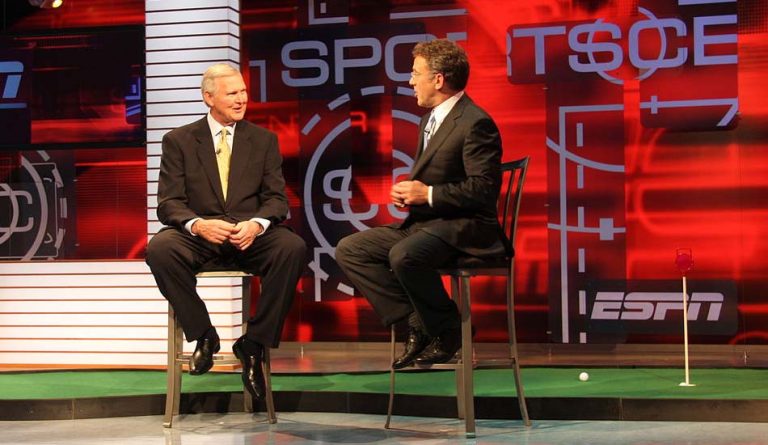 ESPN has asked its show hosts to avoid talking about political issues. (Image: Rob Poetsch via flickr CC BY 2.0 )

A week back, the general manager of the NBA Houston Rockets team, Daryl Morey, posted a tweet in which he extended support for the protestors in Hong Kong. Shortly thereafter, he deleted the tweet and apologized for it as China took strict steps against the team. The NBA is running scared of losing revenue from the lucrative Chinese market and doing all it can to appease the communists.

After Morey’s initial tweet was published, China Daily accused him of being “irresponsible and uninformed.” The Chinese Basketball Association announced that it will suspend cooperation with the Rockets. CCTV and Tencent, China’s NBA media partner who has a 5-year streaming deal worth US$1.5 billion, announced that it will not broadcast any of the games played by the Rockets. The NBA sought to distance itself from Morey’s tweet and stated that it was disappointed by his “inappropriate” comment.

Not satisfied by the NBA’s response, Tencent declared that it will be suspending the broadcast of pre-season games. Given that almost 640 million people in China watched its games last season, the broadcast cancellation could end up being a substantial loss for the NBA and its teams, especially if it is extended to the main games as well.

According to an estimate, the Rockets stand to lose around US$25 million this season. Five other teams are worried that the salary cap of US$116 million expected for the 2020-2021 season could fall by up to 15 percent. To avoid worsening the situation, the NBA has officially stayed away from making any more comments. However, the political backlash to the NBA bowing down to China has been huge. President Donald Trump criticized the organization for pandering to Beijing. Other U.S. lawmakers also joined in to address the issue.

“Imagine living in a world in which not just entertainers and athletes, but non-public figures can be fired by an employer or kicked out of the sporting event by a team, here in America, for condemning the actions of the govt of #China. No need to imagine it. It’s already happening,” Senator Marco Rubio said in a tweet @marcorubio

“As a lifelong @HoustonRockets fan, I was proud to see @dmorey call out the Chinese Communist Party’s repressive treatment of protestors in Hong Kong. Now, in pursuit of big $$, the @nba is shamefully retreating… We’re better than this; human rights shouldn’t be for sale & the NBA shouldn’t be assisting Chinese communist censorship,” Republican Senator Ted Cruz said in a series of tweets (@tedcruz).

ESPN’s pandering to China does not stop there. A show broadcast in the U.S. showed a map of China that included Taiwan and the disputed islands of the South China Sea, essentially toeing the Communist Party line that these regions are Chinese territory. This despite the fact that Taiwan has always maintained that it is a separate entity, with strong support from the American government.