Germany’s Strength Comes From Its Education 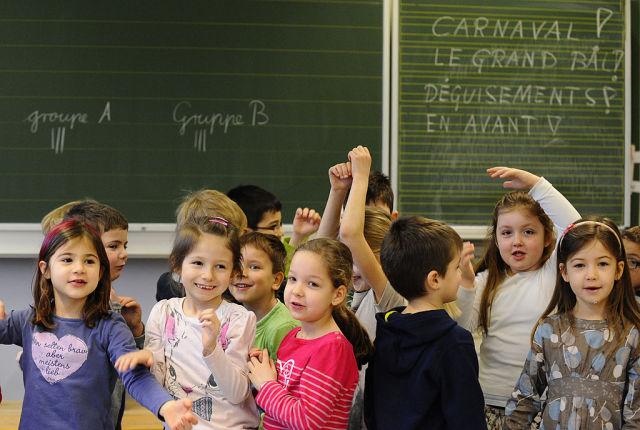 Children attend a French lesson in a German elementary school, on February 21, 2014, in Voelklingen, western Germany. French is called to be the second official language in the Saar region in 2043. (Image: JEAN-CHRISTOPHE VERHAEGEN via AFP / Getty Images)

The child said: “My classmate went to the restroom.” Sure enough, the child at the restroom returned soon after.

My friend continued to ask: “Do you have a license?” (Germany requires fishing to be licensed).

“Do you have something to use to measure the fish?” the German friend asked, because in Germany, one needs to measure fish to determine whether they are big enough to keep according to the legal requirement.

“Yes,” The two children quickly took out a ruler.

“Oh.” My German friend walked away.

I was curious and wondered why my friend wanted to deal with that situation. “These two are the children of your friends?” I asked and my friend shook his head. I persisted by asking if they were his relative’s children. “No, I don’t know them,” came the response.

“Don’t know them? How is it possible? Why should they listen to you?” I was confused.

Germany’s strength comes from its education

During my stay in Germany, I have been considering this question: Why is German society so civilized? By understanding and experiencing German education, we seem to have found some of the answers.

In the eyes of many people, the rise of Germany after the war is inseparable from their nationality of rigorous and hard work. People usually think that Germany’s high-quality national character results from the emphasis on education. As Martin Luther King, Jr., the leader of the U.S. civil rights movement, said: “The prosperity of a country does not depend on the solidity of her national treasury. It does not depend on the solidity of her walls, nor on the grandeur of her public facilities, but depends on the civilization of her citizens, the education of the people, and the vision and the character of the people. This is the real benefit, the real power.”