Supercomputer Simulates How Humans Will ‘Brake’ During Mars Landing 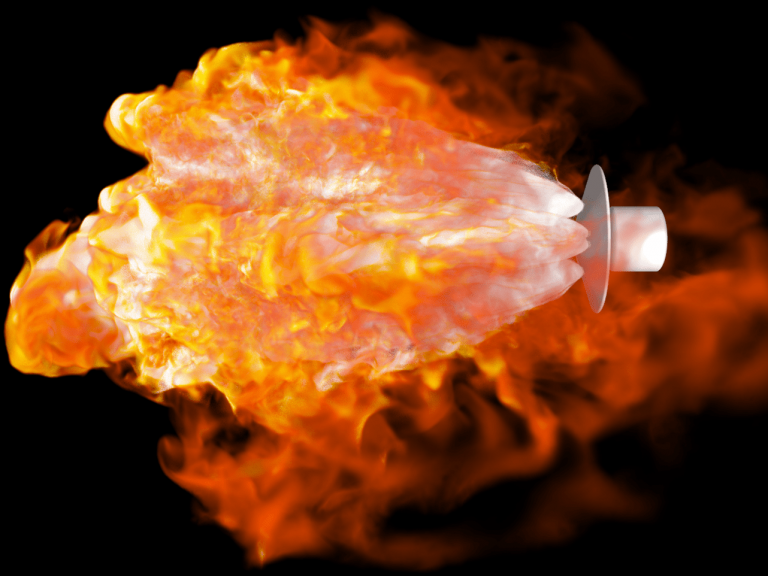 Snapshot of total temperature distribution at supersonic speed of mach 2.4. Total temperature allows the team to visualize the extent of the exhaust plumes as the temperature of the plumes is much greater than that of the surrounding atmosphere. (Image: NASA)

A NASA team uses supercomputing to evaluate a retropropulsion-powered descent to the Martian surface for a Mars landing.  The type of vehicle that will carry people to the Red Planet is shaping up to be “like a two-story house you’re trying to land on another planet. The heat shield on the front of the vehicle is just over 16 meters in diameter, and the vehicle itself, during landing, weighs tens of metric tons. It’s huge,” said Ashley Korzun, a research aerospace engineer at NASA’s Langley Research Center.

A vehicle for human exploration will weigh considerably more than the familiar, car-sized rovers like Curiosity, which have been deployed to the planetary surface by parachute. Korzun said:

“You can’t use parachutes to land very large payloads on the surface of Mars.

“The physics just breaks down. You have to do something else.”

NASA expects humans to voyage to Mars by the mid- to late 2030s, so engineers have been at the drafting board for some time. Now, they have a promising solution in retropropulsion, or engine-powered deceleration. Korzun explained:

“Instead of pushing you forward, retropropulsion engines slow you down, like brakes.”

Led by Eric Nielsen, a senior research scientist at NASA Langley, a team of scientists and engineers, including Korzun, is using Summit, the world’s fastest supercomputer at the U.S. Department of Energy’s (DOE’s) Oak Ridge National Laboratory (ORNL), to simulate retropropulsion for landing humans on Mars.

“We’re able to demonstrate pretty revolutionary performance on Summit relative to what we were accustomed to with a conventional computing approach.”

The team uses its computational fluid dynamics (CFD) code called FUN3D to model the vehicle’s Martian descent. CFD applications use large systems of equations to simulate the small-scale interactions of fluids (including gases) during flow and turbulence — in this case, to capture the aerodynamic effects created by the landing vehicle and the atmosphere. Korzun explained:

“FUN3D and the computing capability itself have been completely game-changing, allowing us to move forward with technology development for retropropulsion, which has applications on Earth, the Moon, and Mars.”

NASA has already successfully deployed eight landers on Mars, including mobile science laboratories equipped with cameras, sensors, and communications devices — and researchers are familiar with the planet’s other-worldly challenges.

The Martian atmosphere is about 100 times thinner (less dense) than Earth’s, which results in a speedy descent from orbit — about 6 to 7 minutes rather than the 35- to 40-minute reentry time for Earth. Korzun said:

“We can’t match all of the relevant physics in ground or flight testing on Earth, so we’re very reliant on computational capability.

“This is really the first opportunity — at this level of fidelity and resolution — that we’ve been able to see what happens to the vehicle as it slows down with its engines on.”

During retropropulsion, the vehicle is sensitive to large variations in aerodynamic forces, which can impact engine performance and the crew’s ability to control and land the vehicle at a targeted location.

The team needs a powerful supercomputer like the 200-petaflop Summit to simulate the entire vehicle as it navigates a range of atmospheric and engine conditions.

To predict what will happen in the Martian atmosphere and how the engines should be designed and controlled for the crew’s success and safety, researchers need to investigate unsteady and turbulent flows across lengths and time scales — from centimeters to kilometers and from fractions of a second to minutes.

To accurately replicate these faraway conditions, the team must model the large dimensions of the lander and its engines, the local atmospheric conditions, and the conditions of the engines along the descent trajectory.

On Summit, the team is modeling the lander at multiple points in its 6- to 7-minute descent. To characterize the flow behaviors across speeds ranging from supersonic to subsonic, researchers run ensembles (suites of individual simulations) to resolve fluid dynamics at a resolution of up to 10 billion elements with as much as 200 terabytes of information stored per run. Nielsen said:

“One of the primary benefits of Summit for us is the sheer speed of the machine.”

Nielsen’s team spent several years optimizing FUN3D — a code that has advanced aerodynamic modeling for several decades — for new GPU technology using CUDA, a programming platform that serves as an intermediary between GPUs and traditional programming languages like C++. By leveraging the speed of Summit’s GPUs, Nielsen’s team reports a 35-times increase in performance per compute node. Nielsen said:

“We would typically wait 5 to 6 months to get an equivalent answer using CPU technology in a capacity environment, meaning lots of smaller runs. On Summit, we’re getting those answers in about 4 to 5 days.

“Moreover, Summit enables us to perform 5 or 6 such simulations simultaneously, ultimately reducing turnaround time from 2 or 3 years to a work week.”

The research team includes visualization specialists at NASA’s Ames Research Center, who take the quantitative data and transform it into an action shot of what is happening. Korzun said

“The visualization is a big takeaway from the Summit capability, which has enabled us to capture very small flow structures as well as really large flow structures.

“I can see what is happening right at the rocket engine nozzle exit, as well as tens of meters ahead in the direction the vehicle is traveling.”

As the team members continue to collect new Summit data, they are thinking about the next steps to designing a human exploration vehicle for Mars. Korzun added:

“Even though we are returning to the Moon, NASA’s long-term objective is the human exploration of the surface of Mars. These results are informing testing, such as wind tunnel testing, that we’ll be doing in the next couple of years.

“So this data will be useful for a very long time.”