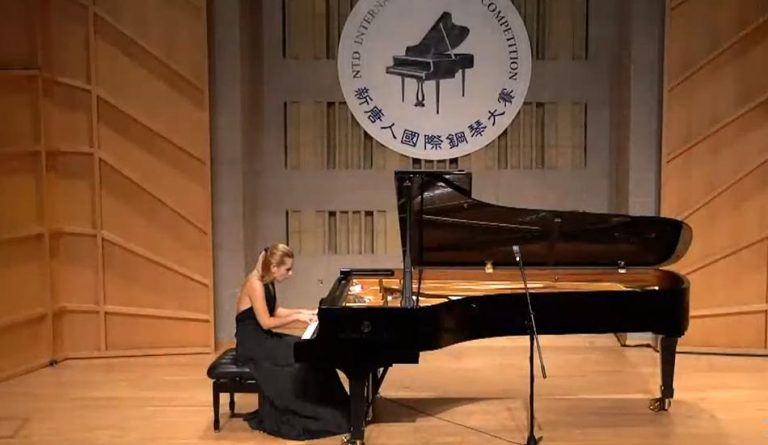 This is the 5th time that NTD has held the piano competition. Established in 2008, the competition aims at promoting the 250-year legacy of classical piano culture. “The mission of this competition is to promote traditional arts of pure authenticity, pure goodness, and pure beauty, bring back the glory of piano masterpieces from the Baroque, Classical, and Romantic periods,” according to the official website.

In total, 86 contestants from 28 nations participated in the competition. Fifteen moved into the semi-finals and six of them advanced to the last phase. The finale performances included — Shih-Yeh Lu from Taiwan, Maxium Anikushin from New York, Nicolas Giacomelli from Italy, Olena Miso from Ukraine, Sanghie Lee from South Korea, and Vladimir Petrov from Mexico.

The semi-finalists had to play a unique piece called Triumph of Goodness, which was commissioned specifically for the competition. D.F., the artistic director of Shen Yun Performing Arts, was tasked with creating the new piece. He had done the same job for the 2016 competition as well. Becky Yao, one of the jury panelists was very impressed with the contestants.

“We were very happy, and as judges we feel very honored to listen to those talented pianists… This year there were so many young pianists, I’m so happy to see young people who want to come back to this tradition,” she said to The Epoch Times. The team is already planning out the details of the next competition, which will also include a specially commissioned piece that will combine Chinese and Western piano tradition.

Mexico’s Vladimir Petrov won the competition, taking home US$10,000. For the finals, Petrov performed Liszt’s Mephisto Valse and Schumann’s Symphonic Etudes. When he took a break between the two pieces, Petrov wondered whether he was performing correctly since playing them required great technical skill. However, it paid off in the end when Petrov received the Gold Award from NTD President John Tang.

Petrov comes from a family of musicians. One of his parents is a violinist and the other a cellist. Born in Russia, he moved to Mexico with his family when he was just three years of age. From the age of 5, Petrov started playing the piano. Ten years later, he moved to Russia to pursue his piano studies. At present, Petrov is completing his master’s degree in Moscow. Petrov believes that music allows him to express his feelings better. He also found the commissioned piece of the semi-finals very touching.

“What I think about this music is that it’s very human, it’s telling about some unfair situations in the country of China, about the persecution of persons by unfair government systems… The name is ‘Triumph of Goodness,’ but it starts very, very powerful. There are a lot of angry [moments] in this music. [But] the only way to keep alive, is to keep this goodness alive inside of you. Goodness always wins,” Petrov said to The Epoch Times.

The silver award went to Nicolas Giacomelli, while bronze was picked up by Sanghie Lee. The remaining three participants won Outstanding Performance awards.