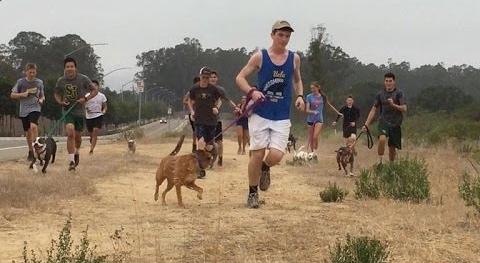 The cross-country team at St. Joseph High School in Orcutt, California, has partnered with the Santa Barbara County Animal Shelter so the kids and dogs can run together. (Image: Screenshot / YouTube)

The cross-country team at St. Joseph High School in Orcutt, California, has a unique tradition. One day a year, every member of the team practices with shelter dogs. For this, the school has partnered with the Santa Barbara County Animal Shelter. The tradition has been in place since 2016.

Taking out the dogs

The idea of having students run with dogs first came into the mind of shelter spokeswoman Stacy Silva. In 2016, she saw the kids run past the shelter. It was then that Silva got the idea. “Geographically, we’re very close… I thought, ‘Why aren’t they running our dogs?'” she said to KTVU. Silva knew that the dogs would love getting some exercise and affection from strangers. She met with the team’s coach, Luis Escobar, and made a proposal.

Escobar liked the concept and in 2016, he asked the students to each run with a dog on one of their practice sessions. The program was a resounding success. The students were delighted to have dogs run with them. “I am not sure who was more excited and having the most fun… the dogs or the kids. Either way, it was a great time and I am sure we will do it again sometime soon,” Escobar wrote in a Facebook post.

Since then, the school has continued with the program every year. Though running with the dogs does slow down the students, the kids are okay with it since it gives them an opportunity to do some good. Inspired by the program, other schools have contacted the shelter and inquired about having similar events held at their institutions.

Silva even got an inquiry from a school 300 miles away from the shelter. “It’s such a joyful clip to see these dogs out of their kennels and just being dogs… It just makes people smile,” Dori Villalon, operations manager for Santa Barbara County Animal Services, said to Today.

In December 2018, California became the first state in the U.S. to ban the retail sale of puppies, kittens, and rabbits unless these animals come from a shelter or rescue organization. The law, called the Pet Rescue and Adoption Act, is aimed at tackling mass-breeding operations in the state. According to the rules, stores selling pets are required to show where they obtained the animals. Stores violating the guidelines will be fined US$500.

“In many cases, puppy mills house animals in overcrowded and unsanitary conditions without adequate food, water, socialization, or veterinary care… As a result, animals bred in these facilities often face an array of health problems, including communicable diseases, behavioral issues, and genetic disorders,” a fact sheet for the Pet Rescue and Adoption Act states.

Taxpayers in the state shell out close to US$250 million a year to support animal shelters. By ensuring that puppies and kittens sold through shops only come from these shelters, the authorities hope that funding for such shelters can be cut down, thereby saving tax dollars.

Recently, California also became the first U.S. state to ban the sale of animal fur products. The bill has been signed into legislation and is applicable to all clothing, shoes, handbags, and other items made of fur. Violators will face penalties. The law will come into effect on January 1, 2023. Native American tribes who use fur products for religious purposes are exempted from the ban.