Is Foot Binding Still in Vogue in China? 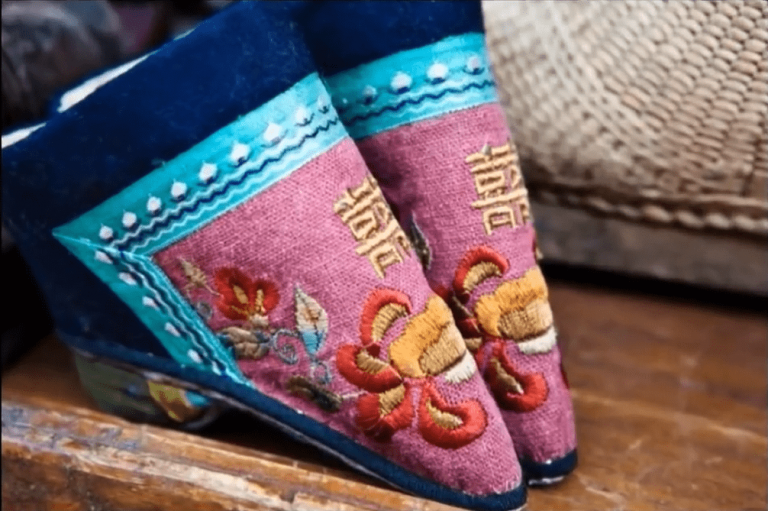 A pair of shoes made to be worn by a woman with bound feet. (Image: Screenshot / YouTube)

Foot binding was a practice in ancient China where women used to break the bones in their feet to modify the size and shape. The practice is believed to have started among upper-class women in the 10th century and was later adopted by the general public.

The toes of the female would initially be curled and broken. Next, the arches of the feet would be broken. Bandages were tightly wound around the feet in order to limit their growth to less than 5 inches in length. The entire process took about six years, with the result being that the person would end up having the much-coveted “lotus feet.”

In 1912, the newly formed Republic of China officially banned foot binding. By the 21st century, only a few elderly women who had undergone foot binding still existed. In 2018, a British photographer, Jo Farrell, decided to capture the images of the last remaining Chinese women with bound feet. She photographed almost 50 women from Shandong, Yunnan, and central China.

Interestingly, Farrell found that the women were actually proud of their tiny feet even though they had undergone long-term pain to achieve the coveted lotus shape. This isn’t surprising since, even in ancient times, the custom of foot binding was not something imposed on women by society. Instead, they had popularized this beauty ideal with the belief that lotus feet would help them get a wealthy, respectable husband.

“I was surprised. I thought it was a tradition that had long disappeared. The trouble is that once the toes are broken and underneath the soles, nothing except surgery will bring them back… [These women] are great-grandmothers, or even great-great-grandmothers. Most of the women I photographed are peasant farmers, harvesting cotton and sweetcorn,” Farrell said to Two Eggs.

Interest in foot binding is reportedly rising in China. A few years back, a 29-year-old woman attracted public attention after it came to light that she had bound her feet for six years. After getting the lotus feet, the woman married a young Chinese man.

In addition to foot binding, other ancient practices are gaining followers in China. Last year, a school in central China made students kowtow in front of their parents. Kowtowing is the practice of bowing down to a person to show one’s complete subservience and respect. Some of the parents apparently had tears in their eyes, while a few of them found kowtowing awkward.

“I took part in an event like this when I was in school and my parents kept teasing me afterwards,” wrote a Chinese social media user on Weibo (South China Morning Post). People have accused the school of bringing back a feudal custom that should never have been imposed on the kids. However, many users argued that the practice of bowing down was good for developing moral character in children.