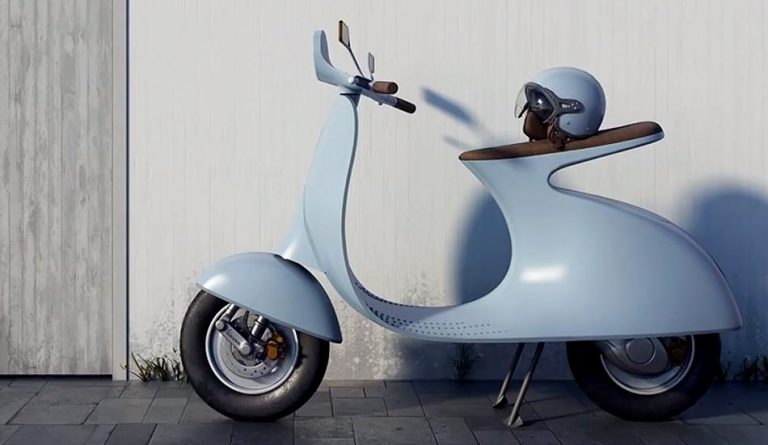 When it comes to scooters, Vespa commands respect. An Italian designer by the name of Giulio Iacchetti recently decided to redesign the original 1946 Vespa. What came out from his efforts is a sleek and futuristic machine that anyone who is a fan of Vespa would definitely like to own.

“The minimalist, lightweight version of the scooter sees the typical lateral shells removed in light of its electric motor, which occupies much less space than the traditional gas one. All controls, the speedometer, fuel gauge, and lights are accessed through an app using wireless connection while a special compartment for storing a smartphone has been created on the dash,” according to Design Boom.

The rear-view mirrors have been slimmed down. The handlebar contains the brake levers, which are in perfect harmony with the handgrips. The footboard has skid-proof rubber segments that add to the vehicle’s style. Iacchetti sacrificed the original droplet shape of the front headlight and adopted LEDs. The space saved was used for the smartphone compartment. The designer has named his concept the “Vespampère.”

Though Iacchetti’s design has not been used by Vespa, the company has actually launched an electric variation of its popular scooter. Named “Elettrica,” its performance is said to be similar to a standard 50cc scooter. The vehicle can be charged in about 4 hours and can travel up to 62 miles on a single charge. Expected to last for 1,000 charge cycles, the Elettrica will be operational for around 10 years for most riders. The scooter has been available in Europe since last year and is said to be the first step in Vespa’s focus on connecting human operators with vehicles that use artificial intelligence systems.

“They [AI] will be aware of people and other vehicles operating in the vicinity, extend the operator’s ability to sense potential perils and opportunities, and provide real time mapping and traffic data that contributes to improving the design of transportation infrastructures in cities… they will recognize them without key fobs, anticipate their driving choices, interact with other devices and vehicles on the road, and allow for degrees of personalization that can barely be imagined today,” according to Piaggio Group.

Vespa has been engaged in a lawsuit against a Chinese company called Zhejiang Zhongheng, which they accuse of copying the design of their scooter. The case was under consideration at the EU’s Intellectual Property Office (EUIPO) for almost five years. Recently, a judgment was made on the matter, which came out to be in favor of the Chinese company. “Due to numerous and significant differences, there is no risk of confusion among informed users,” the judges ruled (Travel Wire News).

The court said that the design of Vespa scooters focused on rounded lines that gave the vehicle a feminine, vintage character. In contrast, the Zhejiang scooter was observed to have a design that stressed angular lines. This apparently creates a difference in perception that marks a clear distinction between the two scooters. The ruling allows Zhejiang to sell its scooters in the EU without having to make any design changes.

However, this is not expected to affect the sale of Vespa scooters too much since the brand enjoys tremendous prestige among customers. Sales numbers have also been encouraging, with 2018 seeing 16 percent more sales than the previous year. Since 2008, more than 1.6 million Vespa scooters have been sold across the world.