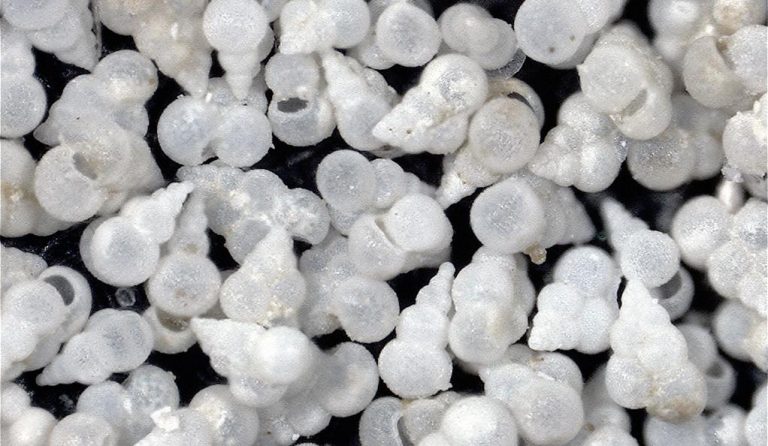 A species of foraminifera called Heterohelix globulosa that was picked and isolated from the K-Pg boundary clay at Geulhemmerberg in the Netherlands. Each fossil measures between 150 and 212 microns. (Image: Yale News)

A new study led by Yale University confirms a long-held theory about the last great mass extinction event in history and how it affected Earth’s oceans. The findings may also answer questions about how marine life eventually recovered.

The researchers say it is the first direct evidence that the Cretaceous-Paleogene extinction event 66 million years ago coincided with a sharp drop in the pH levels of the oceans — which indicates a rise in ocean acidity. The study appears in the online edition of the journal Proceedings of the National Academy of Sciences.

The Cretaceous-Paleogene die-off, also known as the K-Pg mass extinction event, occurred when a meteor slammed into Earth at the end of the Cretaceous period. The impact and its aftereffects killed roughly 75 percent of the animal and plant species on the planet, including whole groups, like the non-avian dinosaurs and ammonites.

“For years, people suggested there would have been a decrease in ocean pH because the meteor impact hit sulphur-rich rocks and caused the raining-out of sulphuric acid, but until now no one had any direct evidence to show this happened.”

It turns out all they had to do was look at the foraminifera.

Foraminifera are tiny plankton that grow a calcite shell and have an amazingly complete fossil record going back hundreds of millions of years. Analysis of the chemical composition of foraminifera fossils from before, during, and after the K-Pg event produced a wealth of data about changes in the marine environment over time.

Specifically, measurements of boron isotopes in these shells allowed the Yale scientists to detect changes in the ocean’s acidity. Previous K-Pg research had shown that some marine calcifiers — animal species that develop shells and skeletons from calcium carbonate — were disproportionately wiped out in the mass extinction.

The new study suggests that higher ocean acidity (lower pH) may have prevented these calcifiers from creating their shells. This was important, researchers note, because these calcifiers made up an important part of the first rung on the ocean food chain, supporting the rest of the ecosystem. Senior author Pincelli Hull, assistant professor of geology and geophysics at Yale, said:

“The ocean acidification we observe could easily have been the trigger for mass extinction in the marine realm.”

Meanwhile, the team’s boron isotope analysis and modeling techniques may have reconciled some competing theories and puzzling facts relating to ocean life after the K-Pg event.

Why, for example, are carbon isotope signatures (analyzed from deep-sea core samples) immediately after the K-Pg asteroid impact identical in fossil material from the sea floor and the surface waters, when normal carbon cycling in oceans should lead to different signatures?

One theory, the “Strangelove Ocean” theory, argued that for a time after K-Pg, the ocean was essentially dead and the normal carbon cycle just stopped. The problem with the “Strangelove Ocean,” according to some researchers, is that many organisms on the sea floor that rely on food sinking from the ocean’s surface continued unharmed across the K-Pg event — an unlikely occurrence in a dead ocean.

Another popular theory, called the “Living Ocean,” suggested that K-Pg killed off larger plankton species, disrupting the carbon cycle by making it harder for organic matter to sink to the deep sea, but allowed for some marine life to survive.

The new study splits the difference. It says the oceans had a major, initial loss of species productivity — by as much as 50 percent — followed by a transitional period in which marine life began to recover. Henehan said:

“In a way, we reconciled both of these ‘Strangelove’ and ‘Living Ocean’ scenarios.

“Both of them were partially right; they just happened in sequence.”

The new study also may have settled a question regarding ocean pH levels leading up to K-Pg. Some researchers have theorized that volcanic eruptions starting hundreds of thousands of years before K-Pg had progressively made Earth more prone to a mass extinction event. This should be reflected in a steady decline in ocean pH levels up until the extinction. Henehan said:

“What we can show is that there is no real signal of gradual pH decline in the ocean in the lead-up to K-Pg.

“Our results do not support any major role for volcanic activity in priming the world for extinction.”

One offshoot from the study may be its ability to help understand the early Earth’s atmosphere and climate. The boron isotopes from foraminifera in this study are an excellent proxy for estimating carbon dioxide levels in the geological past, the authors said.