What Happened When Students Learned of a Teacher’s Misfortune? 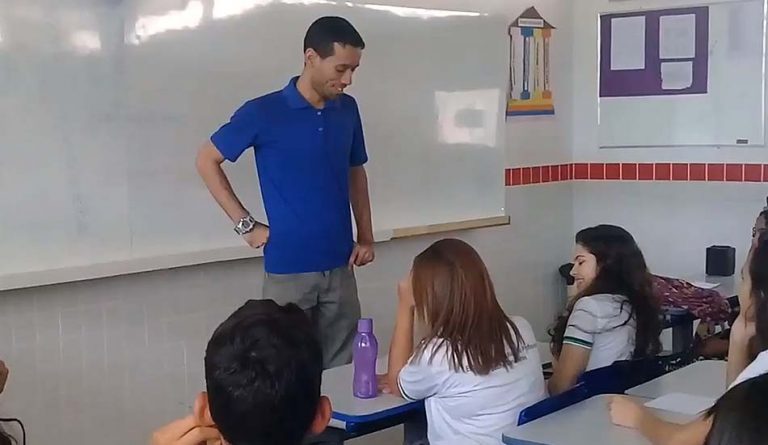 Paiva was in for a big surprise from his students. (Image: Facebook)

Teaching isn’t an easy vocation. You not only have to ensure that all kids in the class learn their lessons properly; you must also be there to take care of their mental and behavioral well-being. And during times when you’re struggling to make ends meet, the pressure from the job can be tremendous. A teacher from Brazil was in for a big surprise one day as he entered his classroom — the students had joined up and collected some money to hand over to him. This was meant to help him tide over financial issues.

In 2016, Bruno Rafael Paiva from Brejo Santo was working as a middle school teacher. It was his dream job. However, the work proved to be difficult due to the long hours and low wages. Paiva decided to stick with the job despite the challenges. But things started becoming troublesome when his first paycheck got delayed. And by the second month, Paiva was sleeping on his friend’s couch. He sank into depression, worried about how he was going to pay the bills and support his family.

When the students found out about Paiva’s financial troubles, they were concerned. Paiva was one of their favorite teachers in the school. The kids decided to help him and held a raffle to raise money. The students managed to collect around R$400 (US$96), which was about two-thirds of his monthly salary. When Paiva walked into the classroom one day, he was taken aback at the several notes scattered around.

The notes were written by the students who thanked Paiva for his efforts. The last note instructed him to open the box on the desk. He did as told and found that the box contained money. Paiva was filled with happiness and started crying. The students rushed toward him and hugged their teacher. In a Facebook post, Paiva mentions that the class was the least behaved but the sweetest he had ever taught.

“I have many rooms that I have loved in my heart as a teacher, but no room has ever shown such love, help, and affection for my teacher’s work as the class did today… They are students, like me, who still believe in the education of the country, believe in the love of others, and in the compassion of putting oneself in the place of others,” he wrote in a Facebook post (Good News Network).

In Kenya, a teacher from the village of Pwani was recently awarded US$1 million when he won the Global Teacher Prize at a ceremony in Dubai. Thirty-six-year-old Peter Tabichi won the award, beating 10,000 nominees from 179 countries. What makes him special? Tabichi not only educates children, but he also takes care of the poor ones.

“Tabichi gives away 80 percent of his income to help the poorest students at the poorly-equipped and overcrowded school who could not otherwise afford uniforms and books. More than 90 percent of his pupils are from poor families, and almost a third are orphans or have only one parent. Drug abuse, teenage pregnancies, dropping out early from school, young marriages and suicide are common,” according to The Guardian.

A member of the Franciscan religious order, Tabichi encourages students at his school in research projects. His students have won an award from the Royal Society of Chemistry for generating electricity from plant life. Tabichi gives one-on-one coaching to struggling students and visits their families to understand the challenges faced by the kids. Due to his efforts, enrollment at his school has doubled in three years. He hopes that Africa will one day produce engineers and scientists who will become famous all over the world.