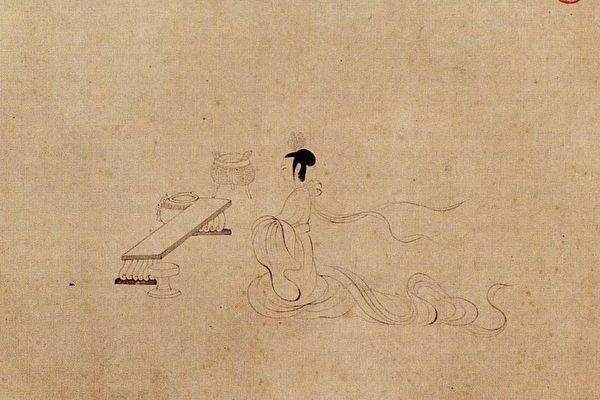 King Zhuang of Chu State (reign 613-591 B.C.) was the most accomplished monarchs among the five rulers during the Spring and Autumn period in ancient China. (Image: Public Domain)

King Zhuang of the Chu State (reign 613-591 B.C.) was the most accomplished monarch among the five rulers during the Spring and Autumn period in ancient China. Lady Fan Ji was the principal consort of King Zhuang.

In the first three years of his reign, Zhuang indulged himself in hunting while neglecting his official duties. Fan Ji knew that as a ruler, his behavior would be detrimental to the kingdom. She attempted to dissuade Zhuang repeatedly, but to no avail. As a way of showing her disapproval to the king, Fan Ji stopped eating meat. Fan Ji’s determination and perseverance eventually moved Zhuang to give up hunting.

In ancient China, kings had many consorts. Fan Ji understood that if the king was preoccupied with women, it would lead to the collapse of the state. In order to prevent King Zhuang from going awry, Fan Ji personally searched for beautiful women across the country. The women chosen by Fan Ji possessed high moral characters in addition to their beauty. In this way, the king would be surrounded and influenced by noble people. Fan Ji’s foresight greatly impressed King Zhuang.

In the early days after King Zhuang ascended the throne, he was a heavy drinker and enjoyed parties day and night. Fan Ji reasoned with him numerous times, but was brushed off by the king. To draw King Zhuang’s attention, Fan Ji stopped dressing up and looking after herself every day. Zhuang was puzzled. He asked Fan Ji: “Why don’t you clean yourself up and look glamorous?”  Fang Ji replied: “You are addicted to wine and women, leaving state affairs unattended. The future of the state is so bleak that I could care less about my appearance.” King Zhuang was touched by her concern and expressed regret for his reckless behavior, but it did not take long before he returned to his old habits.

Fan Ji later ordered a high platform to be built in the southern part of Jinan. Every night, she would go up to the platform and dress herself up nicely. Her move befuddled King Zhuang: “Why do you dress up in the wilderness every night?” Fan Ji responded: “You promised me you would put in great efforts to rule the country, but you did not fulfill your promise. Why should I bother for a person who does not care for me? It’s better to let the moon and the stars appreciate me.” Zhuang finally awakened to Fan Ji’s good intentions and after that, he began to focus on governing the state.

King Zhuan was an avid musician who enjoyed playing a musical instrument called the guqin. One day, he received a famous guqin from Huayuan, a politician of the state of Song. The guqin, named Lingering, was famous for its melodies lingering around for days after being played, and Zhuang completely lost himself in playing the instrument.

Once, he played Lingering for seven consecutive days without attending to state affairs. Fan Ji was very worried and criticized Zhuang: “You are out of control! Do you know the addiction to a guqin by emperor Xia Jie caused the collapse of the Xia Dynasty and the obsession of women by King Zhou of the Shang Dynasty led to his death in Lutai. Now, your addiction to the guqin has prevented you from fulfilling your duties for seven days; are you going to ruin your country and your life?” King Zhuang finally was shaken by Fan Ji’s condemnation. To show his determination to resist the temptation of playing Lingering, he reluctantly ordered that it be destroyed.