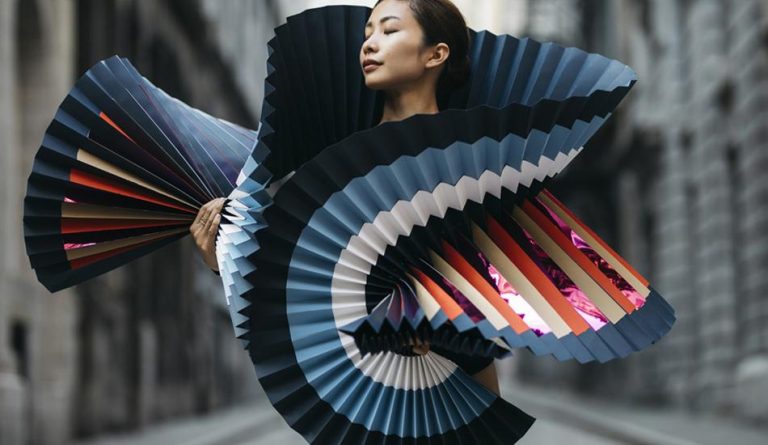 The PLI.Ē project showcases how origami can give an amazing twist to fashion. (Image: via plieproject)

Origami is the Japanese art of paper folding. The aim of origami is to transform a flat piece of paper into a sculpture-like object. In modern times, the techniques of origami are being used in the fashion industry as well. The PLI.Ē project is a creative collaboration between two artists from Montreal who want to showcase how origami can give an amazing twist to fashion.

The artists, Pauline Loctin and Melika Dez, met in 2018 and decided that they should work together on an art project. This collaboration led to the PLI.Ē project that utilizes Loctin’s skill in paper art and Dez’s expertise as a movement photographer. The project showcases dancers from across the world in hand-folded paper costumes.

“We did a first version of the project in studio and a few months later, we decided to push the boundaries even further and risk shooting paper dresses outdoors… Paper can be a fragile material to work with and that is exactly why we decided to make the impossible, possible. No matter which element we would be confronted to, water (rain), wind, we wanted to show that we are limitless,” Dez said to PetaPixel.

Loctin designed each aspect of the dresses in the project, from the color palette to the shape, taking into account the dancer’s body and skin tone. Dez scouted for locations where the dancers would be photographed wearing them. Iconic landmarks from Rome, Paris, Montreal, and New York were selected as backgrounds for the photographs, which were taken under natural light conditions using a Canon 5D Mark IV camera and Sigma Art lenses. The duo hopes to eventually publish a photo book showcasing the project.

Over the past few years, the fashion industry has taken a liking to origami, since the technique is useful in creating new types of geometrical dresses. Origami folding techniques can be used to make decorative fabric folds in blouses, pleats, and so on.

Some believe that silk is best suited for origami clothes. A thesis found that “dupioni silk was lightweight with a texture like paper that could hold folds very well while withstanding the heat of the iron. Silk organza gave designs a pleasant sheen and folded well by hand because of the fabric’s good memory, but could not withstand a hot iron.” (The Spruce Crafts)

Back in 2009, designer Andre Lima featured origami in his Spring collection, with many of the dresses having strong geometric designs. The following year, designer Georgina Chapman introduced origami-inspired dresses in the Spring/Summer 2010 collection. In 2012, Lea Freni showcased the “Fibonacci skirt,” which was modeled after the folding patterns in origami. In 2016, Sid Neigum debuted his origami collection at the London Fashion Week.

One of the famous fashion designers from Japan who incorporates origami in some of his clothes is Junya Watanabe. His Autumn/Winter 2015 collection was full of 3-dimensional forms. The 2016 Fall collection also included 3D cut origami-like clothes that were made from industrial neoprene.

Issey Miyake is another famed Japanese designer known for his origami clothes. Back in 2010, he launched the 132 5 collection, with number 1 referring to the use of a single piece of cloth for each dress, 3 representing a dress’ three-dimensional shape, 2 reminding the fact that the dress can be folded into 2D, and 5 indicating the idea that each dress can be worn in several ways.