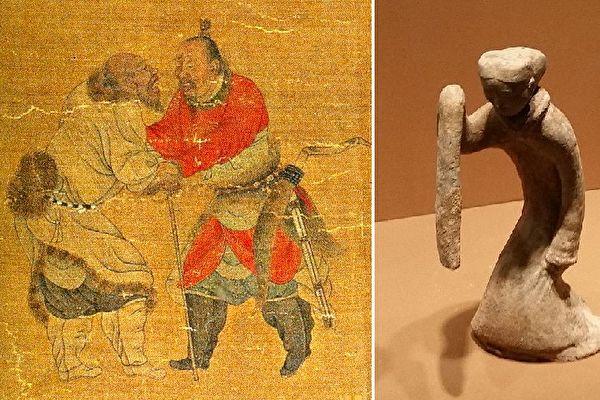 The Xiongnu and the Han Dynasty improved their relationship, and Su Wu was able to return to China. Li Ling raised his sleeves and began to dance and sing. (Image: Public Domain)

The story of Su Wu (140-60 B.C.), a Chinese diplomat and statesman of the Han Dynasty who survived captivity for 19 years in a foreign territory while maintaining his integrity and loyalty to his homeland, has been an inspiration for generations of Chinese children. His good friend Li Ling, a well-known general and warrior, on the other hand, surrendered to the enemy, Xiongnu (a tribal confederation of nomadic peoples who ruled a territory that extended from western Manchuria (Northeast Provinces) to the Pamirs and covered much of present Siberia and Mongolia), and lived the rest of life with disgrace and regret for being a traitor who betrayed his homeland. The opposite stories of these two good friends became the subjects of literary works throughout Chinese history.

In 99 B.C., General Li Ling led an infantry of 5,000 soldiers on an offensive mission into Xiongnu’s territory. Unfortunately, they were encircled by Xiongnu’s main force of 80,000 cavalrymen. Li Ling and his troops battled hard and killed more than 10,000 enemy soldiers; however, his troops were outnumbered and out of supplies, and almost the entire troop was killed. Eventually, Li Ling surrendered.

Emperor Wu initially planned to pardon Li Ling considering the difficulties Li Ling had faced, but he changed his mind when he received news from the frontline that Li Ling was training the Xiongnu army. Emperor Wu ordered Li Ling’s entire family to be executed for his treason.

Shortly before Li Ling went to war, Su was commissioned to serve as an ambassador to Xiongnu. When he arrived, Xiongnu was challenged by an internal uprising and he was detained. Knowing that he would be forced to surrender, Su attempted to commit suicide to preserve his dignity, but was rescued. The ruler of Xiongnu, Chanyu, imprisoned Su in a cellar without food and drink. For several days, Su survived by eating snow and wool from his coat. Chanyu was surprised and thought that it was a miracle.

Chanyu then exiled Su Wu to a barren territory in the North Sea (today’s Lake Baikal). Suffering alone, Su never wavered. He held onto the imperial staff (given to all imperial messengers) of the Han and used it to herd sheep.

One day, Li Ling came; they feasted and caught up with each other. Li Ling told Su Wu: “Xiongnu’s ruler Chanyu heard that we had a friendship so he sent me to convey to you that he wanted you to serve him. Who knows about your loyalty in this uninhabited land? Your two brothers committed suicide because they were ashamed of their failure to complete their missions. Before I came to this war, your mother passed away and I sent her body off to Yangling Mountain; I also heard that your wife had remarried, and I have had no news of all your family members for more than ten years. I do not know whether they are still alive or dead.” Li Ling said further: “I was very frustrated for betraying the Han Emperor when I first surrendered. Please listen to me; don’t resist anymore!”

Su Wu replied: “My father and I had nothing to begin with, and we owe our accomplishments to Emperor Wu. Our family is willing to sacrifice ourselves to repay our gratitude to the Emperor.  Please say no more. If I must surrender, I would rather die immediately.”

Li Ling and Su Wu spent a few more days together. Li Ling again urged Su Wu. “You should seriously consider my advice!” Su Wu again answered: “I have been wanting to die for a long time! If you insist on me surrendering, I will die in front of you today!”

Li Ling finally understood Su Wu’s sincerity and sighed: “You are truly a righteous man! I have committed unpardonable sins because of my betrayal and my advice for you to surrender!” He broke down in tears and parted from Su Wu.