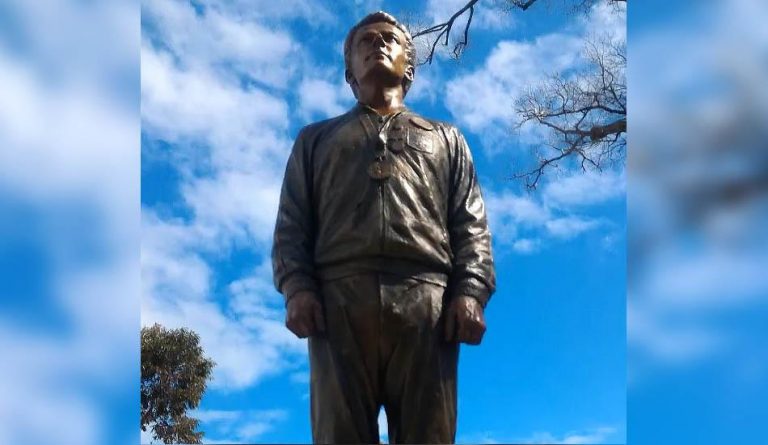 A statue of Peter Norman has been installed in Melbourne. (Image: YouTube/Screenshot)

Peter Norman is an Australian athlete who won the silver medal in the 200 meters event at the 1968 Olympics in Mexico. He is famous for participating in a silent protest with his fellow black athletes during the medal ceremony, questioning the prejudiced treatment of African-Americans. Recently, the government honored him by installing his bronze statue outside of Melbourne’s Albert Park athletics track.

During the medal ceremony, black American athletes Tommie Smith and John Carlos raised their black-gloved fists in the air to bring attention to racial inequality. Though Norman did not raise his fist, he wore an “Olympic Project for Human Rights” badge on the chest.

“He was outspoken about the White Australia policy and the removal of Aboriginal children, so he had a lot of empathy, a lot of understanding of human equality… I guess what Peter saw was how sports could bring people together and how a black man or a black woman when they ran it was almost freedom because they were sort of treated as equals,” Nova Peris, an Olympian, and a former Labor senator, said to SBS.

When he returned back to Australia, Norman was faced with intense criticism from the media. The Australian Olympic Committee (AOC) did not select him for the 1972 Olympics even though Norman had met the qualifying times. AOC stated that Norman was injured and could not qualify for the event, a claim that has been disputed on several occasions. Norman retired soon thereafter.

After he died in 2006, the USA Track and Field Federation declared October 9 as Peter Norman Day. In 2008, Norman’s nephew produced a documentary telling the sprinter’s story, which went on to be nominated for the best documentary prize at the Film Critics Circle of Australia Awards. In 2012, the Australian government issued a formal apology for the treatment meted out to him after his return from the 1968 Olympics. Norman’s running time of 20.06 seconds that won him a silver medal in Mexico still stands as a national record in Australia.

Norman’s daughter Janita believes that the statue is a sign that Australia is beginning to embrace what her father stood for in 1968. “It would have been wonderful to happen when Peter was still with us but it wasn’t to be… It’s really only been in the last few years since his death that Australia has sat up and taken notice and perhaps with the fact that he did pass, it was a bit of a wake-up call,” she said to The Flinders News.

In April, the Australian government announced increased funding for the country’s athletes, with the Australian Institute of Sport (AIS) set to receive over AUD$54 million over the next two years. The money will be used to support upcoming athletes, fund well-being initiatives of the athletes, and provide them with financial support.

“This funding is critical to the future of Australian sport. It will substantially improve the AIS’s ability to discover and support our champions of the future. It will provide better opportunities for young Australians everywhere around the country to realize their potential to graduate from a club sport to representing their region to their State and ultimately their country,” John Wylie, Sport Australia Chair, said in a statement (SportAus).

In March, Sport Australia launched a mental health support app for some of its top athletes. Under the project, about 1,000 athletes from the country will have access to 27 psychologists and mental health practitioners. The plan aims to help Australia’s top athletes retain their peak performance.