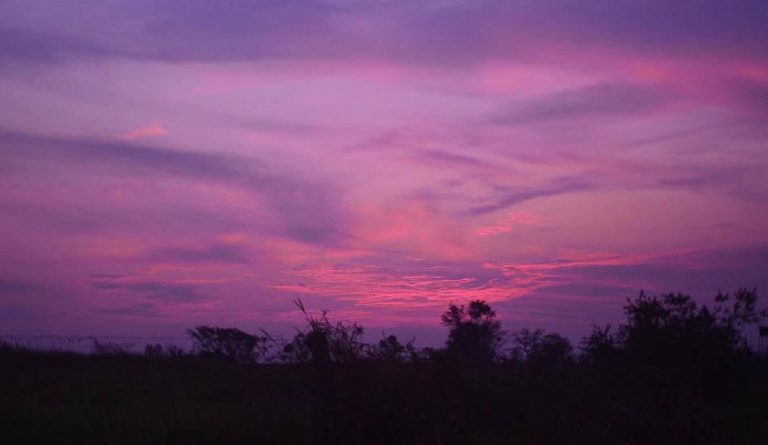 Typhoon Hagibis wreaked destruction all over Japan and has been classified as one of the strongest storms to hit the region in decades. More than 80 people are believed to be dead, with several missing. Some regions have been flooded, with homes completely destroyed. Just before the typhoon hit Japan, skies in the region turned purple.

“As sunlight shines down to Earth, most of the colors of the spectrum are able to reach the surface uninterrupted… But the shorter wavelengths, blue and violet, are scattered in every direction. This light bounces from particle to particle until it eventually reaches your eyes. But the sky doesn’t appear violet and blue because of our eyes’ limitations,” Lauren Rautenkranz, a meteorologist, said to Express.

Under normal conditions, our eyes see only the blue color in the sky since violet has the shortest wavelength in the color spectrum. Around the time of a storm, the sky gets supersaturated, clouds get closer to the ground, and dew increases. These factors allow us to see the color of the sky as it truly is. The scattering of light around the moisture in the air is what gave the sky its purple hue. “A beautiful scene, indeed. But beneath it lies a big catastrophe,” said a Twitter user @stardustjaem.

Typhoon Hagibis caused several embankment collapses that have affected 47 rivers in 66 locations across Japan. About 110,000 rescuers were deployed by the government to deal with the aftermath of the destruction. The administration will be drawing around US$4.6 billion from special reserve pay to cover the costs.

The color of the sky is known to change during certain weather conditions. One of the most famous occurrences is the red sky. There is a popular saying – “Red sky at night, sailor’s delight. Red sky at morning, sailor take warning.” There is actually a scientific reason behind this.

“When weather moves west to east, a red sky at night means that there are clouds overhead, but clear skies to the west — which tells you that the weather will likely be clearing up. A red sky in the morning, on the other hand, means that there’s clear air to the east . . . but clouds overhead. That means the clear zone is moving away, and clouds are moving in,” according to The New York Times. However, this is not applicable in the tropics, where the prevailing winds tend to move from east to west and are a lot more unpredictable.

In some places, the sky has been observed to turn green just before a tornado or thunderstorm. One theory ascribes this color shift to scattered light. Another hypothesis says that the sky is intrinsically blue. But when the storm clouds get illuminated by the golden light of the sun, the sky can appear green in color.