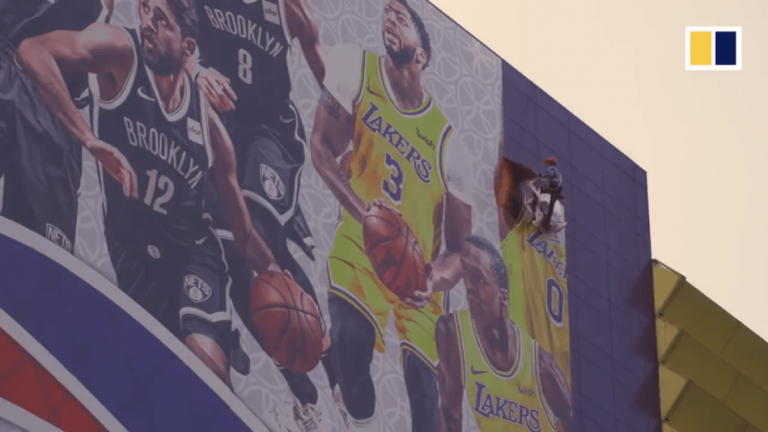 Posters for the NBA game in Shanghai were pulled down as part of the Chinese government's attempt at a boycott. (Image: Screenshot / YouTube)

On October 10, the NBA preseason China Game in Shanghai Stadium was targeted for a “Boycott the NBA” campaign initiated by the Chinese Communist Party (CCP) and the mainland network. However, fans ignored the boycott to support NBA games in China. The end result was that the venue for the event, the Shanghai Mercedes-Benz Cultural Center, which can accommodate 18,000 people, was filled to capacity.

After the Houston Rockets general manager Daryl Morey published a statement in support of the Hong Kong people, the CCP officially activated the state propaganda machine and initiated a campaign against Morey and the NBA. China’s TV networks stopped any mention of the NBA in their broadcasts and every Chinese company terminated advertisements about the NBA. No NBA events were covered by the major sports reporters.

In this hostile atmosphere, the Los Angeles Lakers and the Brooklyn Nets arrived in Shanghai as originally planned to conduct their first China match. All activities originally arranged for the two teams were canceled, including some charity events, Fans Night, and a press conference. The two teams could not even go to the stadium to get familiar with the environment. All event posters were removed from Shanghai streets and stadiums.

The game was still set to be played on schedule. Outside the stadium, the CCP officially organized a large number of fake fans holding Chinese flags in an attempt to prevent genuine fans from entering the stadium. The ruse did not work. Few people took the flags being handed out by the patriotic “fans” and went ahead to enter the stadium anyway. The fake fans were confused and embarrassed. Inside, the stadium was full of people and the small Chinese flags could hardly be seen among the audience.

During the event, the fans forgot all about the controversy surrounding the game and were deeply enjoying the performances of the NBA players. It was exactly what they had hoped to see, no matter the outcome of the game. Being a preseason match, the defensive intensity of the two sides was low-key. The major appeal of the game was its entertainment factor. Whenever the players made some difficult moves, the fans screamed in appreciation.

In the end, the Brooklyn Nets beat the Los Angeles Lakers 114 to 111. Kyrie Irving, the star of the Nets, exited the game early due to a facial injury in the first quarter. Spencer Dinwiddie contributed 20 points and 7 assists. Lakers star LeBron James scored 20 points and 6 rebounds. Anthony Davis scored 16 points and 5 assists.

The next game scheduled in the series was held on October 12 in Shenzhen. The Lakers and Nets once again played to a full house. Ticket prices were the same as those in Shanghai. The minimum price was US$50 and the highest was more than US$2,600. As tickets sold out, some people were reselling them at up to three times the original price, with websites offering the US$115 tickets for US$350 and the US$2,600 tickets for US$9,750. The popularity of the game and the intensity of the fans transcends the CCP’s efforts to punish the Houston Rockets manager and the NBA.