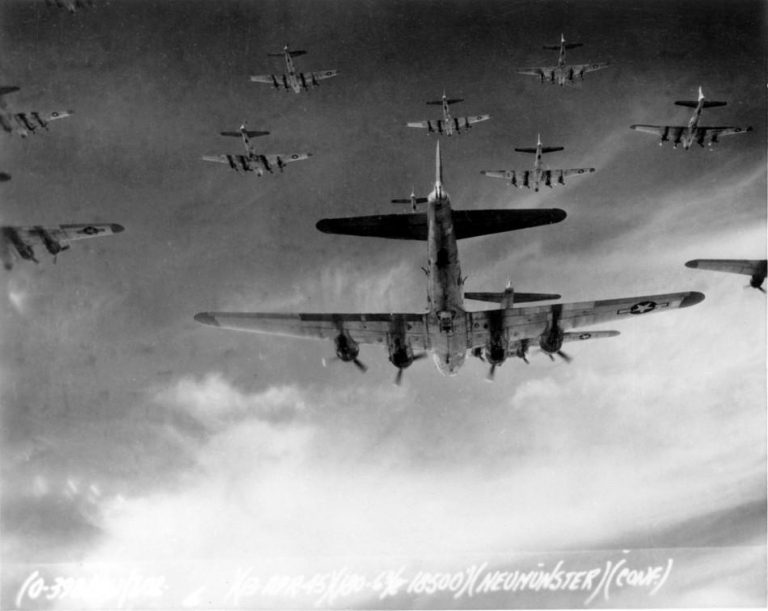 On December 20, 1943, American pilot Lieutenant Charlie Brown was assigned to destroy an arsenal in Bremen, Germany. The bombing mission was successful, but a safe return was most difficult because, in the process of the bombing, the bomber was attacked by at least 15 enemy planes. The plane had lost its tail gun and one wing was seriously damaged; one of the 10 crew members was killed and six others were injured.

Soon, another German fighter flew straight toward Lt. Brown. The two planes were so close, both pilots could see each other’s eyes. Brown couldn’t understand why the German fighter did not fire at him. The pilot kept gesturing at him to follow, and then escorted the damaged bomber through the North Sea, flying with him for 32 kilometers. The German pilot watched the damaged bomber land safely at Norfolk’s airport before flying away. This mysterious event plagued Brown: Why did the German pilot defy orders and let this seriously damaged U.S. bomber get to safety, even assisting it in the process?

More than 40 years later, in 1987, Brown began looking for the German pilot who spared his life. However, he did not even know if the pilot was still alive. In a magazine specifically for fighter pilots, Brown posted an ad that read: “Looking for someone who saved my life on December 20, 1943.”

Brown’s savior was Franz Stigler, who after the war moved to Vancouver, Canada. Stigler saw Brown’s ad. This is how the two “enemies” who had never met in decades came together, and the truth finally emerged. When they met, Stigler talked about why he didn’t fire at the bomber. He said: “With the close proximity, I saw the bloody gunner, saw the scars on the fuselage and the wounded American who was full of fear in the cabin. I knew that this enemy plane had lost the ability to fight against me.”

At the time, the 26-year-old Stigler was already an ace Nazi pilot. He had shot down 22 Allied fighters. If he had shot down another fighter, he could have received the Knight Cross. However, Stigler remembered his instructor telling him before his first mission: “Honour is above everything else. If I see or hear that you are firing at a skydiver, I will personally shoot you. The rules of obeying the war are for yourself, not your enemy. This kind of compliance can keep your humanity.”

In the end, the power of humanity overcame the desire for victory. Stigler recalled: “In my opinion, shooting down a seriously damaged plane is no different from a person who is parachuting. I can’t do that. But I also had a concern about the situation.”

Being so close to the enemy and taking no action to open fire on the damaged plane could have resulted in Stigler being accused of treason with the predictable outcome of him facing a firing squad. Stigler saw a ground German turret and the gunner had blood all over him from a direct hit. He had been pointing at Stigler and was preparing to fire if Stigler made the wrong move. After making his decision, Stigler desperately gestured to Brown and motioned him to follow. So this is how Stigler flew away from German airspace. Brown told Stigler that after he landed, he immediately sent the incredible report to his commander. The commander asked him not to tell anyone about this, so as not to have an adverse effect on others.

In 2008, these two World War II veterans passed away, less than six months apart. Stigler was 92 years old and Brown was 87. In their obituaries, they called each other “special brothers.” Sharing this story means the feelings of these two special brothers will be passed on.