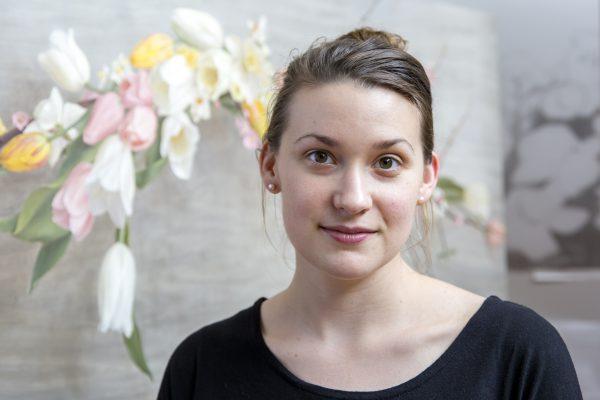 Katie G. Whipple is a painter from New York famous for her flower paintings. (Image: Samira Bouaou via The Epoch Times)

Katie Whipple is a painter from New York famous for her flower paintings. Married to Brendan Johnston, who is also an artist by profession, Whipple’s studio is located in Southampton on Long Island.

Katie Whipple grew up in Indiana. Her mother was a self-taught painter who encouraged Katie Whipple’s talents from a young age. When she was 12 years old, Katie Whipple decided that she wanted to be a professional painter. She eventually enrolled at the Grand Central Atelier in New York City where she spent most of her time mastering figure drawing. She wanted to be a portrait painter. She continued to focus on drawing and painting the figure for much of her early period as an artist. But later on, Katie Whipple started feeling that she wanted to explore other subjects to let her inspiration flow. This is when she began working with flowers.

The decision to paint flowers arose as Katie Whipple wanted to convey joy and delight through her work. This was something she found hard to do with portraits. But with flowers, she realized that she could convey these feelings perfectly. Flowers tend to evoke tender feelings of beauty and love in human beings. She took inspiration from Roman wall paintings, botanical illustrations of the Golden Age, and artists like Rembrandt, Michelangelo, Van Gogh, etc. She feels that her figure drawing experience comes in handy when painting flowers. Katie Whipple sees painting petals to be the same as painting human skin since they are both translucent in nature and have similar relationships with light. Regarding her creative process, she treats every painting as something new.

“In some sense, every piece I make has a completely different process. But to my students or an outside observer, it probably doesn’t seem that way. What I mean is that I tend to start my pieces in a similar fashion: a drawing, an underpainting, then the final pass or passes. But to me, each piece feels like completely uncharted territory, even if I have been painting the same subject matter for weeks or months. Inspiration comes from infinite sources, and the initial spark of an idea is what tends to guide my process for the painting,” she says to Fine Art Connoisseur.

Katie Whipple is not a believer in the adage that beauty lies in the eyes of the beholder. She thinks that it is only true to a limited extent. “Obviously, everyone has different taste, but there is a universality to the things we can all agree on that are beautiful. Everyone stops in their tracks when they see the Winged Victory statue in the Louvre, no matter what culture they are from. We can all appreciate really beautiful, well-made things. There’s a universal language,” she said to The Epoch Times.

Since flowers are universally considered beautiful, Katie Whipple feels that painting them is the ideal way to convey the feeling of joy. She hopes that everyone honors their creativity rather than trying to suppress it, whether it be in designing buildings or cooking meals for their family. In addition to painting, Katie Whipple also teaches part-time at the Grand Central Atelier. She has won the Alma Schapiro Prize and a purchase award from the Indiana State Museum for its permanent collection.