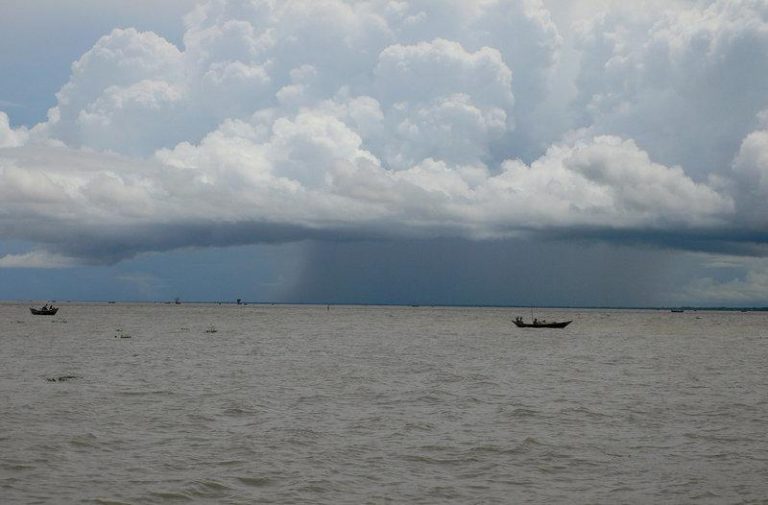 Monsoonal storms like that shown here may cause masses of trees to flow into the Bay of Bengal to be buried in the sediments on the ocean floor. (Image: Christian France-Lanord / Université de Lorraine.)

The flooding from torrential rains caused by cyclones and monsoonal storms, as well as other catastrophic events, is responsible for moving huge amounts of fresh wood to a watery grave deep under the ocean, according to Earth scientists.

Their research, published in the Proceedings of the National Academy of Sciences, shows the first-ever evidence that trees may travel thousands of miles from their mountain homes to settle in the vast sediments extending under the sea from river mouths.

Wood from ancient trees found in the deep sea

Researchers, led by Sarah Feakins, associate professor of Earth sciences at USC Dornsife College of Letters, Arts and Sciences, examined core samples taken from the ocean floor over a thousand miles offshore from Bangladesh in the Bay of Bengal.

Once at the target point at sea, the U.S.-operated research ship R/V Joides Resolution, which is part of the International Ocean Discovery Program, extended a drill mechanism more than two miles down from the ocean’s surface to its floor and drilled more than a half a mile down into the sediments.

They then carried the samples back to the lab, where the research team combed through the resulting core samples. They discovered wood chips in the sandy layers dating back as far as 19 million years.

Their analysis showed that wood in most layers came from lowland sources, but one layer contained wood from trees high in the mountains. Feakins said:

“We found pristine pieces of conifers.

“These trees grow two miles above sea level, up in the Himalayas.”

The trees likely were uprooted during the last ice age by a massive release of water from the breach of a natural dam created by a glacier, landslide, or similar land feature. In what must have been a surge of water, the trees rode rivers thousands of miles from Nepal through Bangladesh and into the Bengal Fan, the largest underwater sediment accumulation in the world.

The scientists, searching through other layers in the core sample, found wood from the lowlands, as well. These wood chips likely were carried to the sea by torrential rains and flooding during monsoons or cyclones that occurred many times across the 19-million-year time span.

Aside from revealing the astounding distance trees may be carried by rivers to the sea due to natural events, the study finds this tree wood is an important part of the carbon cycle.

Most of the planet’s carbon resides in rock, but the remainder flows in various forms between land, air, and ocean, making its way through plants, animals, and microbes as it does so.

In the air, carbon may be part of carbon dioxide, methane, or other greenhouse gases, which can trap heat in the atmosphere, causing the greenhouse effect.

The carbon bound by plants, on the other hand, remains sequestered from the atmosphere until metabolism, decay, or burning releases it, usually shortly after death. Yet rapid transport events by rivers bypass decomposition that normally follows tree-fall and instead delivers fresh wood to be entombed in sediment on the seafloor.

The new findings point to a previously unrecognized way carbon can remain locked away, effectively removed from the carbon cycle, for millions of years. The abundance of wood suggests that the prior estimates of carbon exported by modern Ganges-Brahmaputra rivers were low, and now accounting for wood, the amount of carbon exported and buried may be 50 percent greater than previously thought. Feakins said:

“As we’ve tried to calculate the amount of carbon in all parts of the carbon cycle, we didn’t know about this forest of fragmented trees buried in the ocean floor.

“Now we need to add it to the equation.”

Feakins also noted that the findings emphasize the importance of free-flowing rivers in carbon sequestration, saying:

“Over the past 50 million years, average global temperatures fell significantly, as did atmospheric CO2 levels.”

This was due to natural processes — such as weathering of rocks (including the Himalayas) and burial of plant carbon offshore — that draw carbon out of the atmosphere. This study points to the need to inventory millions of years of carbon sequestration in these elusive woody sediment layers without which greenhouse gases would have kept temperatures high.

Further, the 50 million-year-long cooling trend has rapidly reversed in recent decades due to human activity, which has raised CO2 levels close to those of 3 million years ago. Feakins notes that, in parallel to emissions reductions, understanding the carbon sequestration services that natural ecosystems and rivers perform can inform decisions about forest management, dam removal, and other issues with regard to their potential to help manage the carbon cycle.

Provided by:  Darrin S. Joy, University of Southern California [Note: Materials may be edited for content and length.]