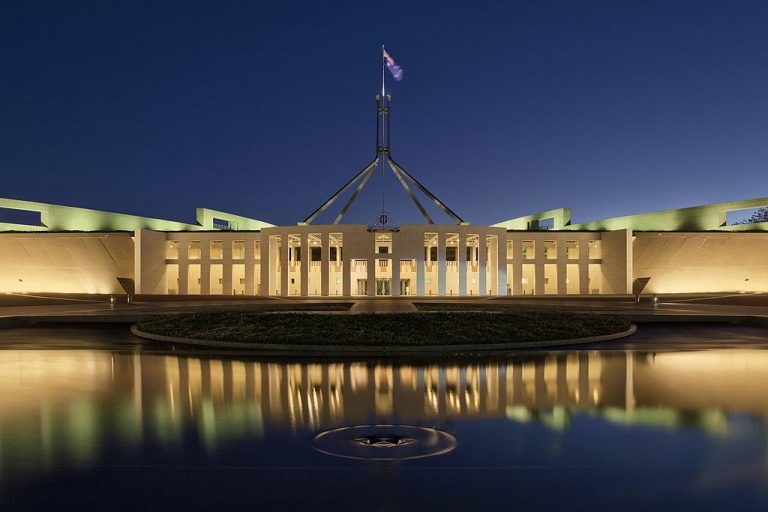 The following is an opinion article by Yan Xia, the chief editor of Vision China Times, an independent Chinese language media company in Australia.

Last week, I went to Parliament House in Canberra to meet with some parliamentarians. In between, I had a spare moment to observe Question Time in the House of Representatives and experience Australia’s democracy in action. The scene in front of me was one of heated debate between the ruling and opposition parties, a typical feature of any democracy where political opinion and exchanges at the top level of government are open to the public. Sitting among the firing off of questions, mockery, jeering, and furious debate, I truly felt that Australian politicians are quite lovable.

In the chambers, Gladys Liu caught my attention. Perhaps it was because she was the only Chinese-looking parliamentarian, or perhaps it was her red dress. Throughout this unusually loud and confrontational debate, she sat silently with a blank expression. I wondered what she was thinking at that moment.

In conversations with parliamentarians, it’s difficult to avoid mentioning this Chinese Australian MP. As a politician who is deeply intertwined with the United Front (an agency of the Communist Party of China that reports directly to the Party’s Central Committee), Liu is the “pride” of the Chinese community as well as the focus of controversy. On the 1st of October, Melbourne’s Whitehorse City council held a 70th-anniversary celebration of the founding of the People’s Republic of China at the Box Hill Town Hall, which included a flag raising ceremony of the Chinese flag at the Box Hill police station. Liu’s attendance, in line with expectations, became a media talking point, as well as the focus of many critics.

A Liberal MP asked me: “Should she not have attended the celebrations?”

“It’s not about should or shouldn’t,” I replied. “I empathize with her because she has no choice but to attend.”

I expressed my opinion about Liu in a previous article. Any fruit grown from the special soil of the “Chinese community” comes out wearing a golden cursed band. Faced with any topic relevant to the “glory of the country,” she must deem herself a Chinese representative. Any speech that might offend the Chinese Communist Party (CCP) would mean losing support from the “Chinese community.” This so-called “Chinese community,” although not representative of all Chinese Australians, is a group leveraged by the Chinese government and can make or break a Chinese Australian politician.

Right after Liu won the federal election and became an MP, she “bravely” expressed her support toward Hong Kong pro-democracy protesters. In the end, this annoyed the CCP, who passed on a prohibition order requesting Chinese Liberal Party members to cut off ties with her as a warning sign.

Perhaps it was due to this that, during her live interview with Andrew Bolt on Sky News, she had no choice but to be vague when answering questions about Chinese President Xi Jinping and the South China Sea. She would rather face media scrutiny than give straight answers to these simple questions because she does not want to bear the consequences of saying the “wrong thing” again.

Australian politicians’ understanding of the Chinese community is always quite naïve. While knowing the CCP’s interference is very rampant, they firmly believe that when it comes to choosing between China and Australia, the majority of Chinese will choose Australia, simply because they live in this free land. They are aware that the Chinese social media WeChat is censored and not regulated by Australian legislation, but they do not believe this social media platform can bring any harm to Australia.

“Australian MPs come from diverse ethnic backgrounds. What kind of trouble would Gladys Liu have if she criticized the CCP’s authority?” This parliamentarian talked about making friends with Liu so he could understand her predicament.

My response was: “If Liu is abandoned by the CCP, not only will the so-called ‘Chinese community’ break ties with her, all kinds of revelations about her will surface into the public and the outpour on WeChat will drown her.”

In this day and age, it would be very ignorant for anyone to believe community leaders controlling Chinese “community associations” are actually working in Australia’s interests.

Around two weeks ago, ABC’s Four Corners program launched another episode to disclose the CCP’s interference in Australia. The Chinese Consulate funds Australia’s Chinese Student and Scholar Associations (CSSA), and in return, the committees of these associations are obliged to “constantly keep in touch with the Chinese Consulate” and report back on various trends within the community.

During a conversation with Australia’s senior investigative journalist Nick Mckenzie, I commented that while these revelations are seen as huge exposés in Western society, they are nothing surprising for a Chinese person.

In fact, all reasonably sized Chinese “community associations” in Australia are applying for funding from the CCP and play a very similar role to the CSSA. Part of the funding is used for promotions; the rest falls into the presidents’ pockets. This phenomenon has caused much in-fighting and has motivated people to buy their way into the presidency. Other methods include establishing large numbers of WeChat platforms in order to appease the Chinese government so that these “community associations” can obtain more CCP funding.

Many parliamentarians do not understand why some politicians choose to “embrace” the CCP for the sake of their own interests, leading themselves down a path with disastrous consequences. I can only say that this is due to cultural differences because it is too difficult to understand people from the East using thinking from the West.

I do not believe the original intentions of some politicians were to bow down to the CCP for personal gain. During close collaborations, however, some fall unconsciously into the “red honey trap” until there is no return. When someone gives up their dignity, continuing on to obtain benefits becomes their only option. However, the finale for every one of those politicians who go down this path is very similar: Once this person becomes useless to the CCP, he/she will be abandoned. Only those who have experienced this will know that feeling of regret.

One day, politicians who have fallen into the “red honey trap” will wake up and share their experiences. I believe these disclosures will be quite remarkable.

One parliamentarian asked me: “What does a trap look like? And how to avoid it?” My response was: “If it can be foreseen, then it is not a trap. It is called willful blindness,” and I laughed.

In the end, I gave him two recommendations. One: There is no such thing as a free lunch. Two: When “miracles” happen, do not think of them as gifts from the heavens; it is more likely that they have been man-made.