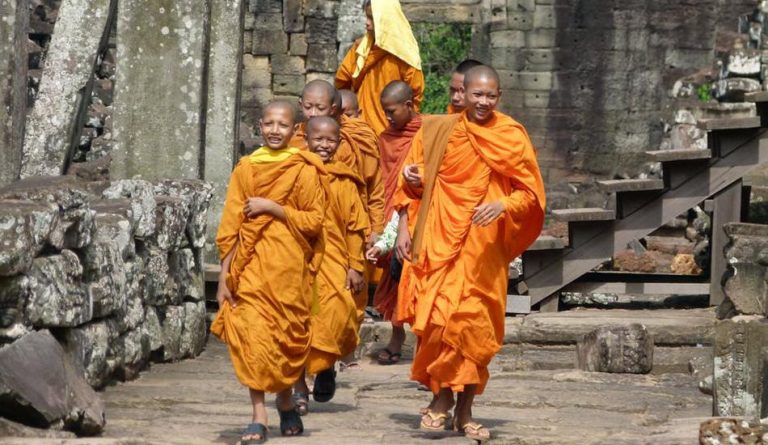 Monks in Cambodia are protesting against a Chinese casino. (Image: via Pexels)

A group of Buddhist monks in Cambodia conducted a 10-day pilgrimage from Phnom Penh to Sihanoukville this month together with a few environmentalists to protest against a Chinese casino. Located in the Koh Rong commune, the casino apparently violated coastal land laws.

In May, local authorities forced the casino to shut down after it was found that the business was operating without a license and was promoting illegal betting games online. The Chinese casino was also releasing untreated sewage water directly into the sea, thereby flouting environmental regulations.

Officials claim that the Chinese casino will soon be demolished and that the owner is seeking permission to rebuild the casino in another location. However, the fact that the casino is yet to be demolished after so many months has made many activists worry that officials might have been bribed. “Even though provincial authorities and relevant institutions have in the past ordered the demolition of businesses, owners continued to operate until a second closure notice had to be issued. Therefore, we ask that the casino’s building be demolished straight away,” Thun Ratha, a youth representative from Mother Nature, said to Khmer Times.

Authorities in the province are said to have ordered local monasteries to abstain from sheltering the protesting Buddhist monks. As a result, the group has had to sleep in tents in an open field. They were followed by the police who kept taking the protestors’ photos and monitoring their progress.

Sihanoukville, located in the Gulf of Thailand, has been seeing increasing Chinese investments over the past years. As a result, casinos that cater exclusively to Chinese customers have been set up. Cambodians are banned from gambling at these centers. Between 2016 and 2017, Chinese tourists to Sihanoukville doubled to 120,000. However, not every local business is happy with the state of affairs.

“My business has halved… We used to have lots of Western tourists coming here, people who liked to try our food. But Chinese tourists don’t want to eat Khmer food and experience our local customs, they prefer to eat their own food. Chinese tourists like to stay in their bubble,” Chhim Phin, who has run a seafood restaurant on Independence Beach since 2003, said to the South China Morning Post.

In July, it was reported that China was building a secret naval base in Cambodia. This alarmed U.S. authorities and the State Department asked the Cambodian government to reject any such proposition from Beijing.

“We are concerned that any steps by the Cambodian government to invite a foreign military presence in Cambodia would threaten the coherence and centrality of the Association of Southeast Asian Nations in coordinating regional developments, and disturb peace and stability in Southeast Asia,” the department said in a statement (Reuters).

Though Phnom Penh denied the reports and stated that no such agreements were in place with the Chinese, some security experts are not too sure about the credibility of the denial. If Cambodia were to allow China to set up a naval base in their backyard, it could make the country an enabler of Chinese aggression in the South China Sea. Worse, Beijing might also seek similar arrangements with other Southeast Asian countries and challenge the U.S. presence in the region.

Recently, Cambodia and China signed a mutual cooperation agreement under which the armies of both nations will increase the scale of their joint military exercises. China has pledged to assist in the Cambodian defense sector.