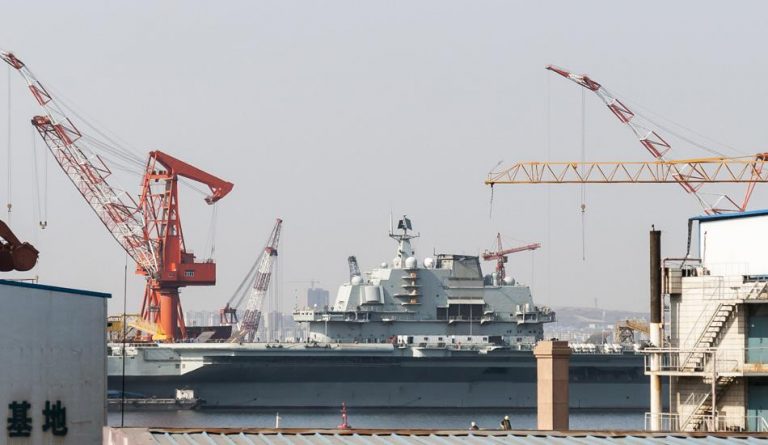 An analysis of satellite images by the Center for Strategic and International Studies (CSIS) has revealed that China is steadily progressing in its task of constructing its first full-fledged aircraft carrier. Taking into account the expansive infrastructure developed at the site, it is believed that the ship will be the first of several vessels manufactured at the place.

Images used for analysis were that of the Jiangnan shipyard outside Shanghai taken last month. These were compared with images from the site taken last April and September. The vast harbor located on the Yangtze River estuary is almost complete, including a 1-kilometer-long wharf and buildings that will be used to manufacture ship components. Since several pre-fabricated sections like bulkheads were identified, analysts suggested that the hull of the ship will be finished in about 12 months.

“We can see slow but steady progress on the hull, but I think the really surprising thing these images show is the extensive infrastructure buildup that has gone on simultaneously… It is hard to imagine all this is being done for just one ship… This looks more like a specialized space for carriers and or other larger vessels,” CSIS analyst Matthew Funaiole said to Reuters.

Earlier, it was reported that China’s first home-grown carrier would be commissioned in a few months. The carrier, Type 001A, apparently set off on its eighth sea trial recently. In August, the carrier was found to have several technical problems that needed attention. The control system in the ship is said to work with J-15 fighters, which will be the main jets used on the vessel. However, the system is yet to be made compatible with other jets, a problem that is the biggest reason why the ship’s commissioning is being delayed. Once the Type 001A ship joins the navy, China will have two aircraft carriers.

“With two aircraft carriers, the PLA Navy will have greater chances to hone its carrier capabilities — conducting more missions, training, and all of these contributing to the accumulation of expertise and know-how… For long-term strategic significance, it means an expanding power projection capability of the PLAN that allows it to promote presence in regions where Beijing asserts national interests,” Collin Koh, a research fellow at Singapore’s Nanyang Technological University, said to Business Insider.

During the October 1 military parade, Beijing showcased several hypersonic-glide missiles that many say could pose a threat to America’s aircraft carriers. On display was the DF-21D, which is capable of hitting warships at a range of up to 1,500 kilometers.

One of the major attractions was the DF-17 hypersonic missile that can possibly maneuver at several times the speed of sound, which makes the missile very difficult to counter. Nozomu Yoshitomi, a professor at Japan’s Nihon University, is worried about the threat posed by the DF-17. “There is a possibility that if we do not acquire a more sophisticated ballistic missile defense system, it will become impossible for both the United States and Japan to respond,” he said to Reuters.

The DF-26 intermediate missile, which can hit America’s Pacific Island base, was shown. Also on display was the DF-41, an intercontinental ballistic missile that is capable of reaching the U.S. landmass with multiple nuclear warheads. In his speech, President Xi Jinping declared that no force can stop the Chinese nation from forging ahead.