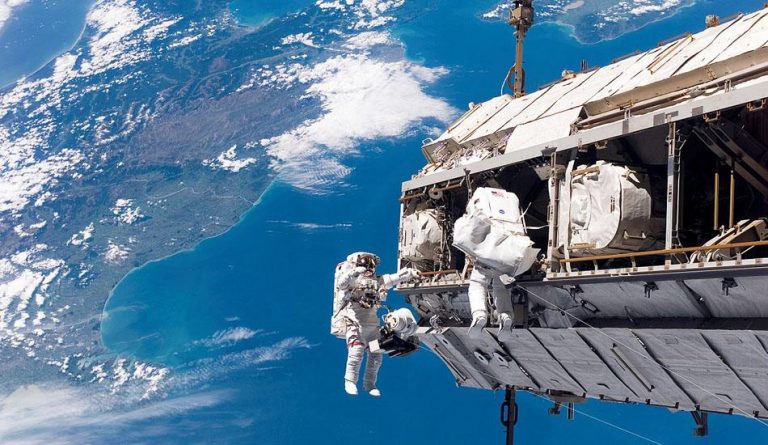 Christina Koch and Jessica Meir, two astronauts from NASA, have become the first in the world to take part in an all-female spacewalk. (Image: wikimedia / CC0 1.0)

Christina Koch and Jessica Meir, two astronauts from NASA, have become the first in the world to be a part of an all-female spacewalk. The event was originally scheduled seven months back. But since the International Space Station (ISS) only had one medium-sized spacesuit at that time, the walk was abandoned. NASA sent up a second suit recently, which allowed for the historic event to take place.

Koch, who has been living on the ISS since March this year, was the first to leave the space station and walk out into space. She was followed by Meir. The astronauts spent five and a half hours in space attached to the handrails of the ISS. During their time out, the two women completed the task of installing new hardware on the space station. The entire event was live-streamed.

“The clarity of the Earth below you is absolutely stunningly beautiful… And how close it feels. Seeing nothing but a vibrant ocean beneath your feet is an amazing experience,” Koch said to CNN. Women have earlier completed spacewalks. However, this is the first time that a group of spacewalkers was comprised solely of females. Svetlana Savitskaya from Russia was the first woman to spacewalk in 1984. In total, 14 women have completed spacewalks compared to 213 men.

Koch will be remaining aboard the ISS till February next year, spending 328 days in space. Scientists are collecting biomedical data from Koch to study the effects of long-term spaceflight on female bodies. At present, most data on the subject has been sourced from men. Both sexes can have different physical experiences in space. Men are more vulnerable to vision changes during spaceflight. However, women are more likely to faint due to orthostatic hypotension, a sudden and temporary drop in blood pressure.

For Meir, the spacewalk was everything she had dreamed about since childhood. “I wrote this in my high school yearbook under future plans, I said: to go for a spacewalk. So, I finally checked that box and have lived that dream… Another dream would be to go to the moon. That’s always the image I had from the very first drawing I did of when I said I wanted to be an astronaut in the first grade – was standing on the surface of the moon. So I think maybe I’ll make that my new dream,” Meir said to Space.com.

Meir’s Moon dream might also come true as NASA has already scheduled a mission, planning to land on the surface by 2024. In a recent speech, NASA administrator Jim Bridenstine indicated that there could be multiple women aboard the lunar mission.

One of the main components of NASA’s Moon mission is a space station called the Gateway. “Instead of orbiting the Earth, it [Gateway] will orbit the moon and serve as a launching ground for missions to the lunar surface. It would be reusable and nimble: NASA could change its orbit to pass over any location on the moon… And like the ISS, the Gateway could be — potentially — continuously occupied by astronauts, establishing a permanent human presence near the moon,” according to Vox.

NASA had originally scheduled the station to be launched by 2026, with a crewed mission on the Moon by 2028. However, Vice President Mike Pence set a new deadline of 2024 in March this year. If the mission is successful, it will be the first time since 1972 that humans have landed on the Moon. This time, NASA will aim to land astronauts on the South Pole, which is believed to contain almost 100 million tons of water and abundant resources like methane, ammonia, hydrogen, mercury, and silver.