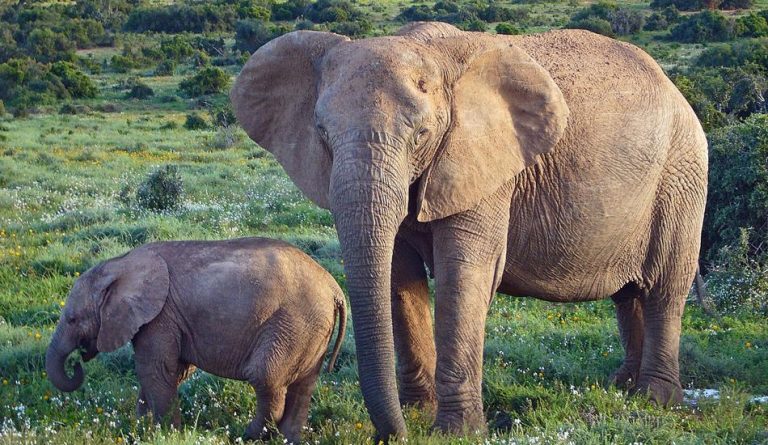 Elephants are intelligent and sympathetic creatures. (Image: via Wikimedia Commons)

Some people tend to see elephants as big, dumb animals. This is not true at all. Several research studies have shown that these creatures are highly intelligent and empathetic beings. They are not only capable of using tools, but they are very caring toward members of their herd.

In one study, elephants were tasked with picking up a stick and handing it over to a researcher. The stick was sometimes tied to a mat. Only by standing on the mat could the elephant remove the stick. They aced the test and successfully removed the stick and gave it to the person. Though this sounds rather simplistic, it was really not the case.

“The elephants understood that their bodies were getting in the way, so they stepped aside to enable themselves to complete the task. In a similar test, this is something that young children are unable to understand until they are about two years old… This implies that elephants may be capable of recognizing themselves as separate from objects or their environment. This means that they may have a level of self-understanding… which is quite rare in the animal kingdom,” Dr. Josh Plotnik, a visiting researcher at Cambridge University, said to the Independent.

Researchers from the University of Sussex in Brighton, UK, have shown that elephants are capable of understanding human voices and languages. In one test, the researchers recorded the voices of men from the Masai and Kamba tribes and played the recording to an elephant group. The Masai are known to kill wild elephants. As such, when they heard the recording of the Masai man, they moved away from the voice and huddled together, displaying fear.

However, when the voice of Kamba was played, the elephants showed no reaction. What’s more surprising is that they remained unfazed when they heard voices from females of the Masai tribe as they posed no threat, showing that these creatures could identify genders. Other studies have shown they can recognize their close companions even after long years of separation.

“Elephants are able to track one another over large distances by calling to each other and using their sense of smell. So the “herd” of elephants one sees at any given time is often only a fragment of a much larger social group. Our work shows that they are able to recognize their friends and renew these bonds even after being apart for a long time,” Dr. Shermin de Silva, an expert who works with elephants, said to Science Daily.

These animals are known to be quite empathetic to one another. Scientists have noted several times that they tend to defend vulnerable calves from threats even if they were not related. If the calf is in danger of being attacked by a predator, they will shield the little one and fend off the attacking animal.

“Such situations do not always elicit distress or pain signals in the calf, and so the protector elephants are predicting their potential distress, rather than just responding to cues… [To do this], the elephants draw upon their past experiences and use this to consider the calf’s emotional state, they then act to prevent the situation escalating and causing the calf distress,” according to World Animal Protection.

Elephants tend to comfort distressed members of the herd through vocal sounds and physical contact. Such levels of empathy are similar to those observed in apes. When an elephant dies, other members of the herd often show signs of mourning. Some of them will stand near the dead body for hours while others will caress the deceased creature. In a few instances, they have been seen trying to bury dead animals.