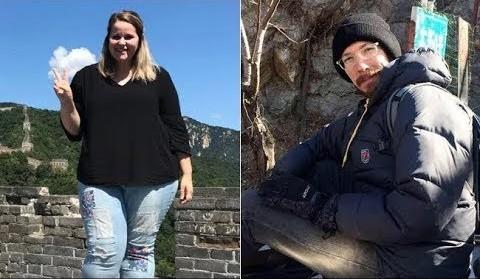 The Chinese government has detained two U.S. citizens running an English language teaching company in the country. The two Americans, Alyssa Petersen and Jacob Harlan, were arrested last month. Their detention is seen as a sign of increasing xenophobia against foreigners, especially Westerners in China.

Petersen and Harlan have been accused by the authorities of organizing illegal border crossings. “We are aware of the detention of two U.S. citizens in Jiangsu, China and the charges being brought against them by the provincial government… We take seriously our responsibility to assist U.S. citizens abroad and are monitoring the situation,” an anonymous U.S. State Department official said to AFP (Hong Kong Free Press).

Harlan is the founder of China Horizons, a company that arranges teaching opportunities for Americans in China. Petersen is the director of the company and has been living in China on and off for the past 8 years. At the time of his arrest, Harlan’s 8-year-old daughter was with him. The child was allowed to make a phone call and was sent back to the United States with a family friend.

A GoFundMe page set up by Petersen’s family reported that they had found an attorney to represent her in China. The attorney visited her in the detention center on October 21. “She has enough clothing and money for supplies there… Alyssa was a bit emotional as the letter from her family was read and that it was a comfort to her to know that so many people cared for her and were trying to help,” the GoFundMe page says.

In the past when foreigners went to teach English in China, they were met with curiosity. But of late, they are being met with suspicion and distrust. Visa issues are also rampant. About 400,000 foreigners were estimated to have been working in the education industry in 2017, of which only one-third had a valid work permit. Several foreign teachers have been deported due to growing xenophobic paranoia.

China Horizons announced that they will be winding down by the end of October. “Because of increasing political and economic problems between the USA and China, we are no longer able to send teachers to China safely. As a result, our company will be closing our doors at the end of October,” the firm said in a Facebook post.

Fewer Chinese tourists in the US

Beijing’s widespread propaganda against America is also discouraging Chinese tourists from visiting the U.S. According to the National Travel & Tourism office, the number of Chinese visitors fell by 4.7 percent in the first nine months of this year. Business travelers have declined by 3.7 percent, while visits by leisure travelers have fallen by 6.5 percent during the same period.

In June, China issued a travel warning in the midst of its ongoing trade war with the U.S., saying that the country is risky due to violence, theft, and robbery. “After growing around 25 percent annually for a decade, Chinese visitor numbers to the United States have been falling since 2017, with industry representatives pointing to a stronger dollar, China’s economic slowdown and trade tensions between the two countries as factors,” according to Reuters.

The U.S. tourism industry is reportedly trying to halt the decline and woo Chinese visitors back. And for good reason — Chinese visitors spend more money than those from other nationalities. According to the U.S. Travel Association, a visitor from China spends close to US$6,700 per person on a single trip, which is 50 percent higher than other international tourists.