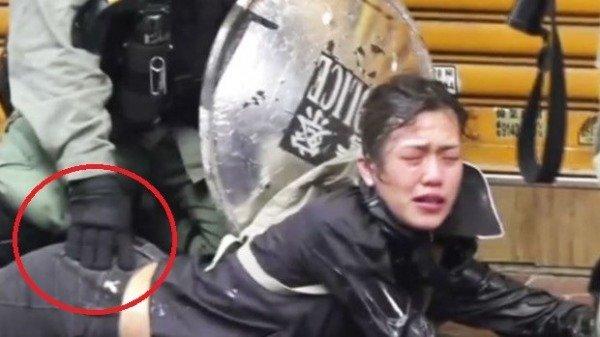 Human Rights Watch (HRW) identifies these as the “basic rights and freedoms to which everyone is entitled on the basis of their common humanity.” (Image: Secret China)

On November 2, the Hong Kong democratic party held several election rallies with less than 50 people each in Victoria Park that did not require police permission following the guidelines of the Election Ordinance. However, on the same afternoon, the police declared the rallies unauthorized and deployed tear gas, pepper spray, and water cannons to disperse protesters to Causeway Bay and Wan Chai, causing clashes between police and protesters.

Dozens of protesters were arrested by the police, some were injured, and others were carried away by paramedics. On a live broadcast by the Hong Kong Cable Television network, a female protester’s face was sprayed by pepper spray and knocked down to the ground by the police. The broadcast showed a police officer pressing this female protester’s buttocks with his hand for an extended period of time.

This video angered many netizens in Hong Kong who posted the following remarks:

“Why must the hand touch that part?”

“Look at the recording, his hand kept on pressing there without letting go!”

“Looking at the film, my first instinct is if it is really necessary to touch her rear?”

There has been more reporting on Hong Kong police being accused of sexual violence, and the titles of numerous articles below demonstrate that sexual violence is not an isolated incident:

“Hong Kong police pulled down a young female’s underwear while dragging her a long way.”

To fight against Hong Kong police brutality and to support the protesters, overseas Hongkongers in 17 countries and 48 cities held a “Global Emergency Rally for Hong Kong and its Freedom” rally on November 2. On the same day, Hong Kong protesters took to the streets with banners. Many foreigners participated in the rally and one described: “Many demonstrations; they don’t give up, and they want to protect Hong Kong.” He expressed that he would continue the demonstration to protect Hong Kong.