China Is Expanding AI Into Schools 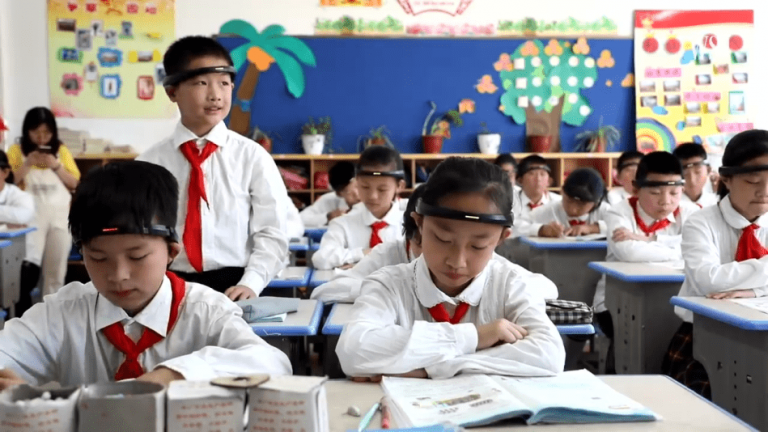 In China, artificial intelligence is being increasingly used in schools. (Image: Screenshot via YouTube)

In China, Artificial Intelligence is being increasingly used in schools. While AI is said to be helping students perform better academically, some believe that the technology is adding unnecessary stress to the lives of students.

The Chinese government has apparently poured billions of dollars into the AI school project. It has brought together AI startups, tech giants, and schools to create a system that always keeps track of students inside a school. The classrooms of such schools are equipped with robots that analyze the health of all students as well as their engagement levels. Kids are made to wear uniforms that are embedded with chips that track their position. Surveillance cameras track how many times a day a student yawns during class or uses their phone.

Teachers use the information to analyze a student’s weak areas. For instance, the data might show that a specific student has low concentration during biology class. This might be taken as an explanation for the student’s low score in the subject. All collected data is also sent to every student’s parents. And this comes with its own set of issues. Some of the parents have started punishing children for things like low attention, high frequency of yawning, and so on. As such, the children are subject to an extra set of pressures that wouldn’t have existed if the AI system was not installed in the classrooms.

To make things worse, the parents are largely not concerned about the fact that the data will be used by the government for research purposes. However, there are a few who are worried that the AI systems are creating unnecessary pressure on the kids. “When we were young, we don’t want our parents to monitor us every day so if one person is being watched by an electronic eye every day, it must have a big impact on his or her psychological health… I think educating children is about teaching them to be polite and humane, and to nurture their curiosity about the world… Why do we need to monitor them?” an open letter written by a concerned parent stated (South China Morning Post).

China is rolling out emotional recognition systems in subway stations and airports. They apparently use facial recognition, eye tracking, gait recognition, and crowd analysis to determine the emotional state of a person. Those who show signs of aggressiveness, nervousness, and stress levels will be marked and monitored.

Such systems are common in Xinjiang where Beijing is holding the minority Uyghur community in detainment camps. “Using video footage, emotion recognition technology can rapidly identify criminal suspects by analysing their mental state… to prevent illegal acts including terrorism and smuggling… We’ve already started using it,” Mr. Li Xiaoyu, a policing expert and Party cadre from the public security bureau in Altay City in Xinjiang, said to The Straits Times.

Though the technology is being labeled as a “gimmick” since it has not matured yet, it is undeniable that the emotional surveillance system is a sign of things to come. The fact that your emotional state is going to be tracked all through the day, with the risk of police even detaining you in case you display any “potential” threat, feels eerily similar to the dystopian technological society showcased in the global hit anime series “Psycho-Pass.”