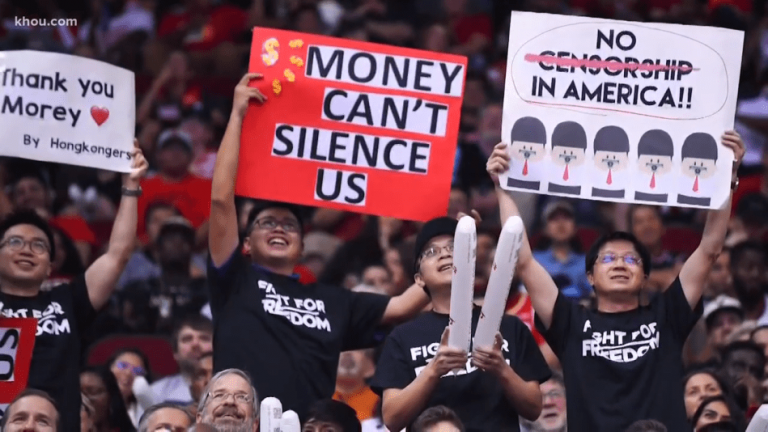 The CCP spent a great deal of time, money, and effort to intervene in this presidential election. (Image: Screenshot / YouTube)

Fearful of losing its market in China, the NBA has adopted a policy not to officially say anything political that might be against Beijing’s interests. The organization is implementing these practices in the U.S., essentially censoring Americans on the issue of Hong Kong and other human rights violations of the Chinese government.

At an NBA game last month in which the Philadelphia 76ers were competing against the Chinese Basketball Association’s Guangzhou Loong-Lions, Sam Wachs decided to show his support for Hong Kong. Together with his wife, Wachs held up signs that stated “Free HK” and “Free Hong Kong.” Having lived in the Chinese city for two years, Wachs felt sympathy for the Hong Kong protesters and wanted to support them.

But the authorities soon confiscated their signs and kicked them out of the stadium during the second quarter. “The NBA does not want [to] deal with this… It’s all about money. They want their sweet, sweet Chinese money. And they say they’re for human rights and equality, but that’s only up to a point. And that point is the Chinese market,” Wachs said to NBC News.

A statement from the 76ers said that Wachs and his wife were removed due to continued “disruption of the fan experience.” Given that Wachs and his wife were just sitting in their seats and holding signs, accusing these two people of disrupting viewer experience is such a weak argument that it clearly betrays the organization’s true reason for such an action — the organization just didn’t want to anger China once again and damage its business prospects.

In another game featuring the Brooklyn Nets and Toronto Raptors, a group of protesters arrived at the match wearing T-shirts with slogans like “Stand with Hong Kong” and “Free Tibet.” A few were wearing clothes that featured Winnie-the-Pooh, the cartoon character banned in China because it is used to mock President Xi Jinping. Some of the protesters were removed from the arena after they started chanting against the actions of the Chinese government.

“We want to use our performance art to show our support for Hong Kong and the NBA… They want to take away freedom of speech and now spread dictatorship to America… It seems like NBA people cannot choose their words. So if we don’t stop them, they not only will do bad things in China, they will do bad things in America,” an organizer of the protest said to the New York Post.

Tencent, the company that holds the rights to live-stream NBA games in China, recently halted the coverage of a game after one of the spectators at the match was seen wearing a dress that had a Taiwanese flag pictured on it. The incident happened during the match between the Miami Heat and the Los Angeles Lakers.

The company stopped live coverage by declaring that some of the elements in the game did not conform to “broadcasting standards.” “Viewers complained that the summary of the game’s highlights available later only showed the left half of the basketball court and that none of the action on the right side was visible,” according to Taiwan News. Almost 25 million people in China were watching the game when it was abruptly stopped by Tencent.