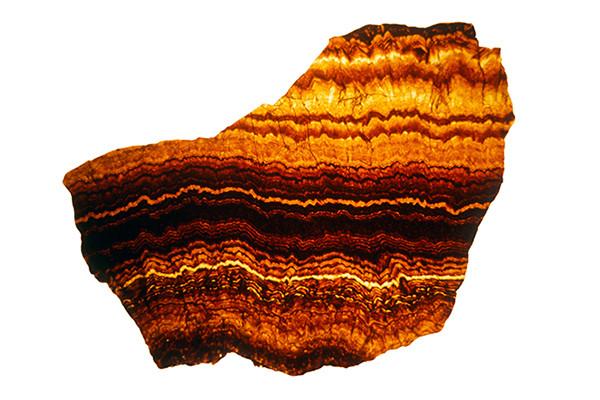 Yellow and brown banding in the mineral sphalerite are caused by changes in rainfall and groundwater. Penn State scientists found patterns in the banding match movement in Earth's orbit that impacted climate in the deep past. (Image: Mingsong Li)

Changes in groundwater millions of years ago created alternating layers of vivid yellow and brown in the mineral sphalerite, and those variations align with movements in the Earth’s orbit that impacted climate in the deep past, Penn State scientists found.

The findings provide new evidence for how changes in climate influenced the planet’s rainfall and groundwater, a process that scientists have not well documented, the researchers said. Mingsong Li, an assistant research professor of geosciences at Penn State, added:

“This study shows sphalerite banding can be used as a fingerprint of groundwater in the geological past.

“Groundwater is crucial for understanding global sea level change, chemical weathering and landscape evolution, and this study presents a new idea to help discern the role of groundwater in the Earth system.”

Using new dating technology, the scientists found these deposition patterns corresponded with changes in Earth’s orbit over tens of thousands to hundreds of thousands of years, known as Milankovitch astronomical cycles.

These cycles refer to changes in the shape of Earth’s orbit and variations in the tilt of its rotation that may have led to warmer, wetter conditions for periods from 299 million to 252 million years ago, when the sphalerite formed, the scientists said. Hubert Barnes, distinguished professor emeritus at Penn State, added:

“What we are doing is marrying geochemical research on ores with what we know about astronomical cycles from very different research.

“No one has ever made an attempt at this before.”

The research builds on previous work that shows hydrothermal fluids that created ore deposits in modern-day Iowa, Illinois, and Wisconsin started as groundwater in the Appalachian Mountains. The water was heated by geothermal processes and picked up metals and solutes along its journey.

But during times of high precipitation, new sources of groundwater flowed to roughly 3,000 feet below the surface carrying higher oxygen levels and mixing with the hydrothermal fluids to create different colored bands in the sphalerite.

The researchers digitized a grayscale profile of the sphalerite from Wisconsin and analyzed the bands using new computer software that can detect periodic signals in the samples. They found distinct frequency peaks in the banding that correlate with the Milankovitch cycles.

The results are published in the journal Geochemical Perspective Letters — could help explain changes in sea level during times in Earth’s history when the planet was too warm for ice, the scientists said.

Changes in groundwater can have real impacts on sea levels. If all groundwater drained into oceans today, sea levels would rise more than 180 feet, according to scientists.

Yet projections of long-term global mean sea levels on time scales of hundreds to thousands of years often do not include the contributions of land water storage, the scientists said. The Intergovernmental Panel on Climate Change, for instance, considers water storage on land contribution to sea level rise to be small. Li said:

“This is the first direct evidence to show groundwater activities in the deep past.”