WeChat: A Tool of Authoritarian Control? 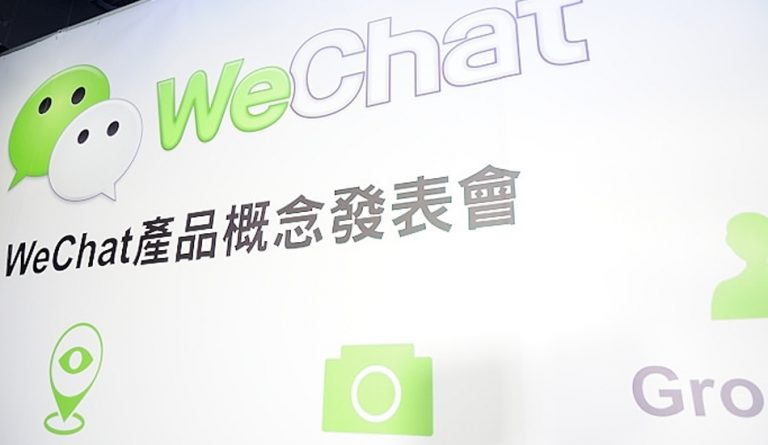 WeChat is owned by the Chinese company Tencent and is considered by Western intelligence agencies to be the least secure platform in the world. (Image: Sinchen.Lin via Flickr)

“This WeChat account has been suspected of spreading malicious rumors and has been temporarily blocked…” is the message BBC reporter Stephen McDonell received earlier this year, after posting photos of a live event on his WeChat account. No commentary. Just a few shots of Hongkongers commemorating the 30th anniversary of the Tiananmen Massacre — a topic that has been forced to disappear in Mainland China.

WeChat is owned by the Chinese company Tencent and is considered by Western intelligence agencies to be the least secure platform in the world. It’s a multifunctional app; like Twitter, Facebook, GoogleMaps, Tinder, and ApplePay all in one. In China, where citizens say it’s hard to function without it, 1 billion active daily users were recorded in 2018, and numbers are said to be growing. The app is used not only for social networking but in every facet of life — from dating to ticket booking to food delivery to buying stocks and making credit card payments. Around 100 million overseas users are registered.

In the United States, most of the 4 million Chinese diasporas have WeChat accounts. “This e-commerce generation orders up virtually their whole life from mega apps like WeChat,” says columnist Trudy Rubin, who was shocked on her recent visit to China at how it has become a “nearly cashless society.” Rising China is determined to do things its own way. “Everyone from school kids to grandmas pays for everything with a personal barcode on their cell phone… many vendors, including taxis, reject cash,” she says.

WeChat’s popularity is assisted by the Chinese government, which has banned the use of many overseas social media, including WhatsApp and Facebook, which require a VPN to be accessed in China. Most U.S. newspapers and major websites are also blocked. As required by the government, WeChat has pledged to step up its censorship to comply with the requirements of the Cyberspace Administration of China. Posts containing “sensitive words” — such as the Tiananmen Massacre, Liu Xiaobo, Falun Gong, or the U.S.-China trade war — or anything critical of the Chinese government, is either blocked from being posted or removed, sometimes within seconds.

It’s pretty clear that WeChat is becoming an increasingly powerful weapon for social control. The information transmitted via its platform is massive, with the daily number of messages averaging above 38 billion. Over 14 million companies have an active presence on the app. “People wouldn’t be able to speak to their friends or family without it. So the censors who can lock you out of WeChat hold real power over you,” says McDonell, who had to admit his guilt for “spreading rumors”, and agree to have a faceprint captured and his voice recorded in order to reactivate his account.“Capturing the face and voice image of everyone who was suspended…would be considered very useful for those who want to monitor anyone who might potentially cause problems,” he says.

Many overseas Chinese, even with an open Internet, continue their use of WeChat due to its convenience and cultural appeal, rather than opening up to overseas apps or tuning into local news channels. With various levels of government agencies using the money to deploy inauthentic accounts, state-affiliated opinions, sentiments, and unverified anecdotes are woven into Chinese people’s online experiences.

With the aptitude of China to actively indulge and incite, as well as block and censor, the Chinese diaspora often takes in skewed information and shares the Chinese government’s views about human rights issues, even while living in countries where access to critical, contrary information is widely available. In effect, the government is still able to control a significant portion of the information that overseas Chinese receive — but it doesn’t stop there.

For example, in September 2017, the Chinese government quietly and effortlessly erased Canadian parliament member Jenny Kwan’s WeChat post to her constituents. She had written regarding Hong Kong’s Umbrella Movement, praising the young protesters who “stood up and fought for what they believe in, and for the betterment of their society.”

WeChat is used by the Chinese government as a surveillance tool

The Chinese government’s use of WeChat as a surveillance tool is well-documented. WeChat has a resident Internet police bureau dispatched by the Ministry of Public Security (MPS), which polices the platform 24/7. All personal information on the platform is monitored, collected, stored, analyzed, censored, and freely accessed by authorities, who’ve jailed more and more citizens for what they’ve said in private conversations. For example, Mr. Shike, a Muslim in Xinjiang who’d explained to his relatives about how to worship, had his WeChat voice messages used to sentence him to two years in prison in 2017. Another Xinjiang resident, Mr. Haitao, was sentenced to 19 years for using WeChat to post comments that “defamed” the Chinese government.

The platform essentially serves as a perfect tool to implement the regime’s censorship and surveillance. Having WeChat on your phone means that extensive metadata is being collected about you — all your online activities and nearly everything about you is being monitored and readily accessed; it’s much like wearing an electronic ankle bracelet. Even overseas data, such as that collected from users in India and Taiwan, is routed to Tencent servers in China, receiving equal treatment. Chinese authorities have even openly admitted that they can collect deleted WeChat messages.

Credible reports have said that China’s espionage agencies use WeChat to collect intel, monitor overseas opposition, and recruit potential spies. Beijing, for example, has developed sophisticated xRAT spyware that is tied to WeChat for use against Hong Kong protesters.

WeChat’s censorship constitutes an extreme violation of human rights to freedom of thought and expression. And as if the danger of WeChat wasn’t enough, China’s now combining the app with Huawei’s global 5G network and cheap smartphones, as well as other Chinese tech innovations, to become a real threat to the world.

Even so, some of us overseas are being enticed to join in the use of WeChat as a way to reach more Chinese people, especially in business. Is the trade-off worth it? It’s a platform that’s actively manipulated by a foreign government — one that is known for its extreme human rights violations — to advance its own interests. Who would want to trade their conscience and personal information for such a service?