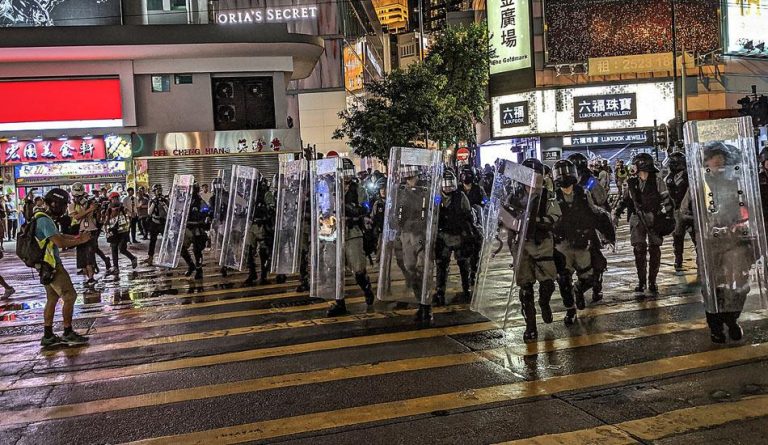 A group of students from the Polytechnic University has been forced inside the campus, with those trying to escape being arrested and attacked. (Image: Studio Incendo via wikimedia CC BY 2.0 )

The Hong Kong administration is going all out in its crackdown against pro-democracy protesters. A group of students from the Polytechnic University has been forced inside the campus, with those trying to escape being arrested and attacked.

The university has been seeing heightened anti-China protests for the past week. On Sunday, it became the focus of a series of intense clashes between the protesters and the police. While the officials threatened to use live rounds on students, the protesters launched gas bombs at the officers. A tight blockade was eventually set up, essentially trapping hundreds of students inside the university.

Those who have tried to run away from the campus have been attacked with tear gas. No one is being allowed inside Polytechnic University, including journalists. The trapped students are nervous and anxious as to their fates at the hands of the authorities. The HK police have officially declared the campus and surrounding areas a riot zone, which means that all student protesters currently inside could face a potential prison term of up to 10 years.

“Of course we want to leave… We are still quite safe currently in the campus, but if we try to leave … they will arrest us. They are just everywhere surrounding campus… We might have to wait for a lot of time… Currently around me we just want to escape, we don’t have any equipment to help us fight,” a 23-year-old protester trapped inside the university said to CNN by phone.

Since the Hong Kong protesters sense that this might be the last stand against complete Chinese domination, they have started resorting to violence in a desperate bid to keep the city free. Pro-democracy activist Joshua Wong has asked Germany to stop training Chinese soldiers given the situation in Hong Kong.

But what is disturbing is the increasing acts of violence being committed by the Hong Kong police against the protesters. A 15-year-old boy was sent to a hospital recently after officers fired tear gas. A 21-year-old student was shot in the stomach at close range. If the students trapped inside Polytechnic University continue to resist the officers, many fear that it could end up in a bloody showdown. The university’s staff association and the Hong Kong Professional Teachers’ Association came out criticizing the government for their mistaken decisions and asked that the use of deadly weapons be avoided.

Meanwhile, a senior U.S. government official has lashed out at the HK administration for using violence on campus. “We condemn the unjustified use of force and urge all sides to refrain from violence and engage in constructive dialogue… As the President has said, the United States expects Beijing to honor its commitments under the Sino-British Joint Declaration and to protect Hong Kong’s freedom, legal system, and democratic way of life,” he said in a statement (Reuters).

Hongkongers are now worried about the increasing possibility of China deploying military forces to ‘settle’ the protests. PLA personnel are already inside Hong Kong and recently carried out a street cleaning operation. According to Demosisto, a pro-democracy organization, this sets up a worrying precedent in the sense that the local administration can now invite the PLA to interfere and deal with internal issues.

“They want the Hong Kong people to get used to the PLA’s public activities in Hong Kong and gradually rationalize the PLA’s operations in Hong Kong under boiling frog effect,” the organization said to The Epoch Times. The Chinese military has entered Hong Kong only once since 1997 — in 2018 when the troops assisted the city in clearing up after a typhoon. China seems to have decided that control over Hong Kong is far more essential than the value of its economy or even the lives of its people.