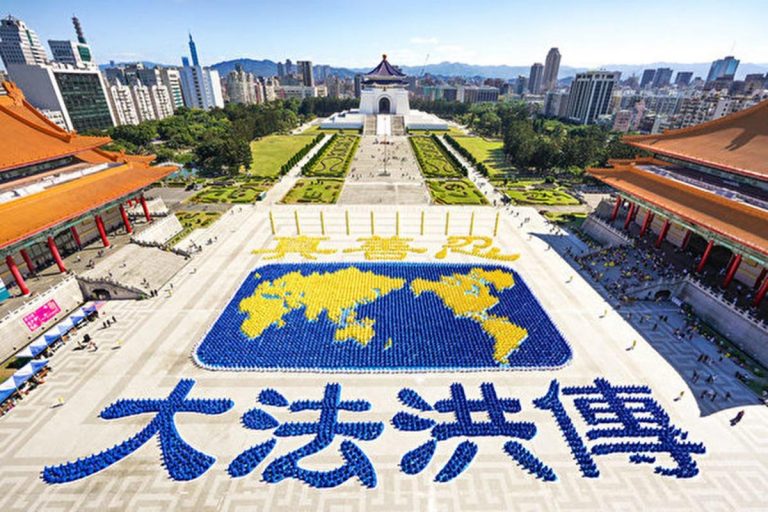 Over 6,500 Falun Gong practitioners participated in the Image and Character Formations in Taipei on November 16. (Image: Chen Po-chou / Epoch Times)

It has become more of a norm in recent years that thousands of adherents of Falun Gong, also known as Falun Dafa, get together at the iconic Liberty Square in front of the National Chiang Kai-shek Memorial Hall in Taipei, Taiwan, to participate in the Image and Chinese Character Formations around this time of the year.

With the theme of “Wide spreading of Falun Dafa around the world,” over 6,500 practitioners of this spiritual meditation practice formed a magnificent image of a giant world map and seven traditional Chinese characters, in a formation that was 101 meters long and 88 meters wide, at the Liberty Square on November 16.

The grand Image and Character Formation was followed by a large-scale demonstration of the Falun Gong exercises, comprising five sets of peaceful and gentle movements, including a standing meditation, sitting meditation, and another three sets of exercises.

According to Huang Chunmei, organizer of the event and vice president of the Taiwan Falun Dafa Association, it’s meaningful to hold this annual Image and Character Formation at this famous tourist landmark. She noted that the magnificent and solemn scene of the formation and the exercises demonstration activities can let the visitors at home and abroad know more about Falun Gong’s peacefulness and compassion, as well as its popularity around the world.

Additionally, dozens of display boards erected in two lines on the ground between Liberty Square and the arched gates of the Memorial Hall also help visitors understand the magnificence of Falun Dafa and the truth behind the ongoing atrocious persecution against this peaceful spiritual discipline in China since 1999.

Many visitors, especially those who are from China, were amazed by the peaceful and splendid scenes of this Image and Character Formation, as well as the large-scale demonstration of the Falun Gong exercises. Some of them also expressed that they would like to learn more about Falun Gong and support Falun Gong to help more people around the world benefit from this spiritual practice, and let the universal principles of Truthfulness, Compassion, and Tolerance prevail in this human world.